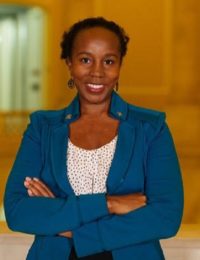 Lesley Anne Warner is a Professional Staff Member on the House Foreign Affairs Committee, where she serves as the principal adviser to the Ranking Member on matters relating to sub-Saharan Africa. She holds a PhD in War Studies from King’s College London, an M.A. in Security Studies from the Edmund A. Walsh School of Foreign Service at Georgetown University, and a B.A. in International Relations from Carleton College, where she was awarded the Boren National Security Education Program Scholarship and a Mellon-Mays Undergraduate Research Fellowship. Her research has been published in PRISM, Royal United Services Institute Journal, Naval War College Review, Stability: International Journal of Security and Development, War on the Rocks, The Atlantic, The National Interest, World Politics Review, and the Washington Post’s Monkey Cage Blog. She has been interviewed on media outlets such as PBS News Hour, BBC News, France 24, and Radio France Internationale, and has been quoted in the New York Times, Voice of America, Foreign Policy, U.S. News & World Report, and Stars & Stripes. Dr. Warner is a Term Member at the Council on Foreign Relations, a 2018 Next Generation National Security Fellow at the Center for a New American Security, a Security Fellow at the Truman National Security Project, an International Career Advancement Program (ICAP) Fellow, and a member of the Editorial Board of Parameters, the U.S. Army War College Quarterly.