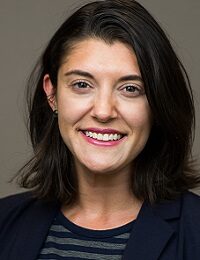 Katarina O’Regan is a Sanctions Policy Advisor for the Treasury Department’s Office of Foreign Assets Control (OFAC), where she supports the implementation, administration, and evaluation of U.S. government sanctions programs. Prior to OFAC, she served as an Analyst in Foreign Policy at the Congressional Research Service (CRS), where she provided nonpartisan policy analysis and conducted briefings relating to transnational crime, trafficking, and corruption to Members of Congress and congressional staff. She also published reports on topics including wildlife trafficking, U.S. sanctions programs that target human trafficking, and the use of foreign assistance to address international corruption. She joined CRS as a Presidential Management Fellow and completed rotations working on illicit finance at the Financial Crimes Enforcement Network and on African affairs at the Office of the Under Secretary of Defense for Policy. Prior to CRS, Katarina worked on a range of international security and development issues, including in roles with the U.S. Embassy in Tunis; the Asian University for Women in Bangladesh; the British Embassy in Washington; Partners in Health in Liberia; the National Democratic Institute’s Gender, Women, and Democracy team; and the International Organization for Migration in Uganda. She holds a B.A. in International Studies from Fordham University and earned a M.S. in Foreign Service from Georgetown University. While at Georgetown, she served as a Teaching Assistant to former Secretary of State Madeleine Albright.