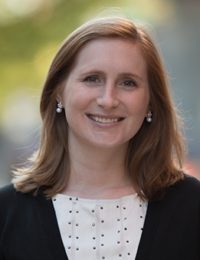 Mary Laurie is an advocate for sustainable U.S. development and diplomacy programs who cares deeply about human rights and social justice for all people. She currently serves as the Government Relations Manager for the U.S. Global Leadership Coalition, a nonprofit coalition of over 500 businesses, NGOs, and retired military leaders united in support of a strong International Affairs Budget. Before joining USGLC in 2015, she worked at InterAction with its Public Policy Team on federal budget analysis focusing on humanitarian and development assistance accounts, as well as food security advocacy. Before InterAction, was a foreign policy fellow in the office of Senator Robert P. Casey, Jr. (D-PA), where she helped draft and negotiate the 2014 Global Food Security Act. Before her experience in the Senate, she served in the Washington, DC office of Human Rights Watch where she facilitated advocacy to the U.S. government and investigated protections for refugees. Mary holds a B.A. in International Relations from the College of William and Mary and a J.D. from Penn State University’s Dickinson School of Law. Her analysis has been published in Foreign Policy Magazine, The Guardian and Lawfare.