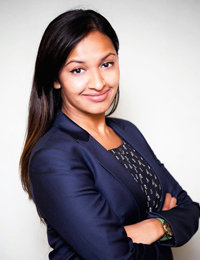 Maureen Ahmed joined the U.S. Department of State in 2016 as a U.S. Presidential Management Fellow (PMF).  As a PMF, her rotational assignments included serving as the Acting Deputy Coordinator of the President’s Emergency Plan for AIDS Relief (PEPFAR) South Africa program at U.S. Embassy Pretoria and as a Political Officer at U.S. Embassy Zagreb, where she received the Department’s Benjamin Franklin Award for Public Service.    Maureen is currently a Foreign Affairs Officer and is responsible for managing the PEPFAR program for South Africa, the United States’ largest global health assistance portfolio (a budget of over $1.4 billion across Fiscal Year 2019 and 2020).  Prior to joining the government as a civil servant, Maureen worked at a range of international organizations including Women Deliver, United Nations Development Programme, Parliamentarians for Global Action, and United Nations Population Fund. She worked in partnership with the governments of Tanzania, Ghana, Uganda, and South Africa on evidence-based policy programs to fight against domestic violence, female genital mutilation, and child, early and forced marriage; as well as international programs that advocate for access to family planning and HIV services for adolescent girls and women. A proud New Yorker hailing from Queens, Maureen graduated from New York University Wagner School of Public Service with a Master in Public Administration and a focus on International Policy and Management.  Maureen is fluent in Bengali and conversational in Urdu and Spanish.  She has traveled to over 52 countries and hopes to grow that list with a few more stamps every year.