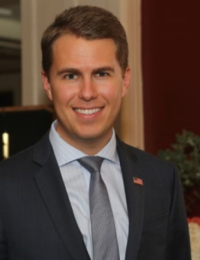 Miles Taylor is a professional staff member on the Committee on Homeland Security in the U.S. House of Representatives, where he advises Committee Chairman Michael McCaul on counterterrorism, foreign policy, and other national security matters.  He also serves concurrently as the Chairman’s chief speechwriter and the Majority Staff Lead for the bipartisan Congressional “Task Force on Combating Terrorist and Foreign Fighter Travel.”

Miles worked previously on the House Appropriations Committee, participating in historic efforts to cut federal spending and helping to oversee billions of dollars in federal security-related programs.  Before that, he served as the youngest presidential appointee in the George W. Bush Administration and has focused on national security and foreign policy at the White House, Pentagon, Department of Homeland Security, and several think tanks.  In 2014, Miles was named a Truman Governance Fellow and Foreign Policy Initiative “Future Leader.”

Miles serves as co-founder of the Washington Leadership Academy, a four-year high school which will open in D.C. in 2016, and is also producing a television documentary on the history of “Page” messengers on Capitol Hill, featuring narration by journalist Cokie Roberts and interviews with prominent former pages, including Microsoft Founder Bill Gates.