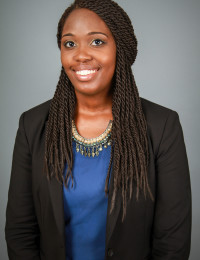 Morgan McClain-McKinney currently serves as a Program Manager at the U.S. Agency for International Development (USAID). In this role, she provides oversight and guidance on budget and resource management, strategy development, and program implementation for the President’s Young African Leaders Initiative (YALI) which supports young leaders in sub-Saharan Africa that have demonstrated excellence in government, business, and civic leadership. Her experience at USAID also includes working with the Power & Trade Africa Initiatives, the Congressional Liaison unit, and the Private Capital Group for Africa. Morgan is particularly interested in the use of technology in political processes, and enhancing social inclusion and political participation for youth and other marginalized groups.

Prior to joining USAID, she spent time on Capitol Hill, as well as with the U.S. Department of State, Bureau of International Organization Affairs. Morgan holds a Master’s Degree in Political Science from the University of Illinois at Urbana-Champaign, and currently serves as an Alumni Board of Visitors Member for the department. Morgan has published several articles on topics to include diversity and inclusion in Foreign Affairs, youth, trade and investment, and entrepreneurship in sub-Saharan Africa having been featured in notable publications such as the American Foreign Service Journal, Ventures Africa Magazine, and the Diplomatic Courier. Morgan is a seasoned development professional, and has completed both short and long term assignments abroad at USAID Missions in Ghana, Ethiopia, Kenya, Nigeria, South Africa and Tanzania.