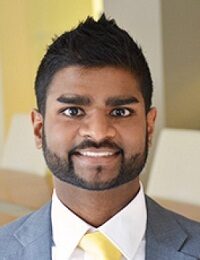 Sarath K. Ganji is a Strategy and Transformation consultant with Guidehouse’s National Security practice, where he provides U.S. Department of State clients with counsel on building strategic partnerships and mainstreaming data-driven practices. Before Guidehouse, Sarath was an analyst-in-charge at the Special Inspector General for Afghanistan Reconstruction, where he conducted oversight of over $1 billion in U.S. education, energy, and agriculture sector programs. He also spent time on the Hill and with several think tanks, both in the United States and overseas. His past fieldwork and publications have explored civil-military relations in Israel, labor rights in Qatar, and medical tourism in the United Arab Emirates, the last of which he completed as a U.S. Fulbright Scholar. A native of central Louisiana, Sarath holds degrees from the Harvard Kennedy School and Georgetown University, and completed fellowships with the Hebrew University of Jerusalem and the University of Michigan. He also serves as a mentor to the Center for the Study of the Presidency and Congress’s presidential fellows and as an advisor on Guidehouse’s racial justice efforts.