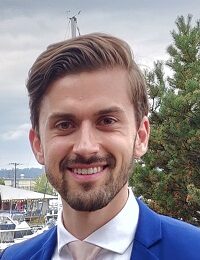 Semir Hasedzic is an analyst with Novetta, an advanced analytics company, where he supports U.S. federal clients by providing analysis on security and political issues in the Western Balkans. He has over seven years of program management and consulting experience with a focus on economic policy, political transitions, and security challenges that may affect U.S. engagement in the region. Since 2016, he has been a co-founder of the Bosnian-Herzegovinian Diasporic Conference, an annual networking conference to build solidarity for Bosnian youth diaspora in North America. He also dedicates his available time to standing up a soccer academy with a team based out of The Netherlands. He received his B.A. in International Studies from the University of Washington and a M.A. in Conflict Resolution from Georgetown University. A Bosnian native, Mr. Hasedzic proudly calls Washington State and Washington, D.C.  his American homes and always wears his Bosnian pride. He and his wife currently reside in Washington, D.C.