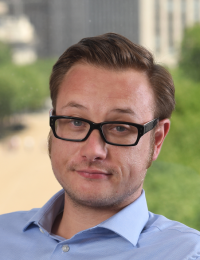 Stephen Wicken works with the Investments team at Humanity United, a private foundation that works to build peace and advance human freedom. He focuses on strategic development of initiatives on responding early to risk of mass atrocities and on long-term sustainable peace building.

Previously, he was a senior fellow at The Nexus Fund, where he functioned as senior researcher and analyst on a number of countries, including Nigeria, Sri Lanka, and Myanmar, and worked on strategic planning on issues such as supporting the use of technology for atrocity prevention. He was a research analyst and team lead at the Institute for the Study of War, where he led the Iraq and GCC teams and authored numerous analytical pieces, including the report, Iraq’s Sunnis in Crisis. He has been awarded a number of fellowships, including a Harry Frank Guggenheim fellowship, a Bourse Chateaubriand fellowship from the French government, a Fox International Fellowship to study at Sciences Po in Paris, and a Mellon Fellowship from the University of Cambridge. Originally from Canterbury, England, he holds degrees in Politics from the University of Cambridge, International Relations from Yale University, and History from Brown University.