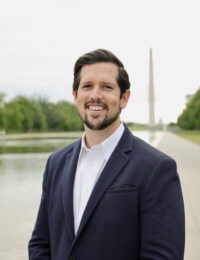 Zach Beecher is the Chief of Staff and a founding member of America’s Frontier Fund, a nonprofit venture capital firm working to secure a new generation of American technology leadership. Previously, Zach served as Director of Operations at Healthworx, the corporate innovation arm of CareFirst BlueCross BlueShield, where he drove the synthesis of operations and strategy across their health technology incubation, venture, and corporate development verticals. Prior to this experience, Zach was the Principal for C5 Accelerate, where he led their early-stage portfolio in cyber, artificial intelligence, and the space economy as well as the development of an advisory service supporting defense innovation. Zach is a proud Paratrooper, having spent his active duty time with the 82nd Airborne Division where he led combat logistics advisory for supported Iraqi forces during Operation Inherent Resolve, and is a current Reservist with an Airborne Civil Affairs battalion. Additionally, Zach serves on the board of Primo Energy, a leading wind energy startup, and advises on their support of the U.S. Air Force through the SBIR program. Zach received his B.A. from Princeton University focusing on national security policy, MPhil from the University of Cambridge, and M.A. from King’s College London, where he was a Rotary Scholar. He also had the opportunity to serve as a Global Governance Fellow supported by the Bosch Foundation and Global Public Policy Institute.