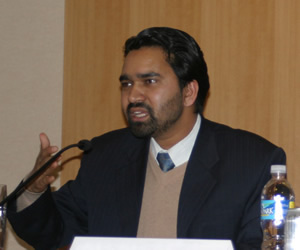 The National Endowment for Democracy (NED) is mourning the tragic death of Nepalese democracy and human rights advocate Suvash Darnal, who was killed on August 15th in a highway accident outside Washington, D.C. “Suvash’s death is a huge loss, for his family most of all and his friends, and also for his country,” said Carl Gershman, President of the National Endowment for Democracy, where Darnal was a Reagan-Fascell Democracy Fellow in late 2008 and early 2009. “He had so much to give,” added Gershman. “He was such an extraordinarily good and positive person, always with a sparkle and a smile. He is deeply mourned and will be sorely, painfully missed.”

Darnal was highly devoted to the cause of marginalized groups in Nepal, particularly the Dalit community. As founder and managing director of the Samata Foundation, a Kathmandu-based research and advocacy organization that is a NED grantee, Darnal worked to bolster the involvement of Dalits in policy making and to ensure that Nepal’s new constitution includes protections for Dalits and other minorities. “Suvash was a leading Dalit activist with fresh ideas and a progressive vision for his country,” said Mona Dave, NED Program Officer for Asia. “He worked tirelessly to end discrimination against the Dalit community and other minority groups. Suvash was an inspiration to all he encountered and his tragic death is a great loss. We will always remember his gentle demeanor and kind heart.”

Darnal, who recently completed a fellowship at Stanford University’s Center for Democracy, Development and the Rule of Law, was also the founding member of the Jagaran Media Center, created to build awareness in the media about marginalized groups and train Dalit youth as journalists. According to Brian Joseph, NED’s Senior Director for Asia, “Not only was Suvash a dedicated and principled activist, he was also a creative thinker who was always willing to engage in discussions in an effort to refine his ideas. He will be deeply missed by all who knew him.”

Remarks by NED President Carl Gershman on the Enduring Importance of Suvash...

We're pleased to announce our Fall 2015 cohort of Reagan-Fascell,...