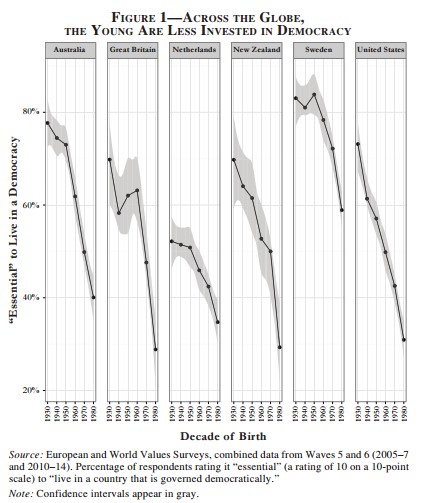 Recent political developments in both Europe and the United States have raised new questions about the stability of liberal democracies. Building on their earlier article, “The Danger of Deconsolidation: The Democratic Disconnect,” in the July 2016 Journal of Democracy, Roberto Foa and Yascha Mounk argue in the January 2017 Journal of Democracy that survey evidence of citizen disenchantment should serve as an “early warning sign.” It suggests that democracy may turn out to be precarious even in countries where scholars thought it had been fully “consolidated.”

Foa and Mounk’s research shows that the problem of declining citizen commitment to liberal democracy is not restricted to the United States, but in fact can be found “across all longstanding democracies.” They acknowledge that the phenomenon they identify as “democratic deconsolidation” is still “an unexplored area of the conceptual map,” but they begin the task of charting this new territory.

“The work of Professors Foa and Mounk makes a signal contribution to our understanding of democracy’s current troubles.  Anyone who cares about the future of liberal democracy will want to read their newest essay,” noted Journal of Democracy coeditors Marc F. Plattner and Larry Diamond.

Debunking the myth that millennials are ushering in the end of the Western world by Jeff Guo, Monkey Cage, Washington Post (December 2, 2016)

The September 2018 edition of the Forum newsletter...

In the Journal of Democracy's April 2020 issue, contributors...