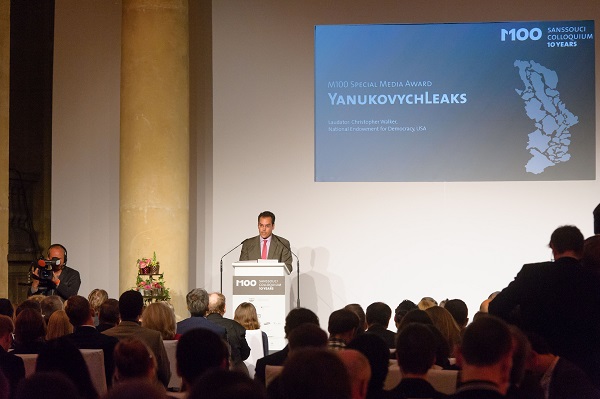 International representatives from politics, media, academia, and civil society gathered in Potsdam, Germany to discuss the future of journalism and media freedom in the tenth annual M100 Sanssouci Colloquium media conference on September 12, 2014.

Among the conference’s activities, a special media award was given to the Ukrainian NGO, YanukovychLeaks, for their work recovering thousands of documents that former Ukrainian President Viktor Yanukovych attempted to destroy before he fled Ukraine.

Forum Executive Director Christopher Walker delivered the following remarks in recognition of the group’s efforts to shed light on corruption in Ukraine:

Ladies and gentlemen, it is a particular honor to be able to recognize such an important and unique initiative that is so critically helping Ukrainian society in its struggle to escape corrupt governance – and to enable a Ukraine that is whole and free.

The honor of this special award is being bestowed on YanukovychLeaks for its “outstanding achievement of salvaging an enormous number of documents, systematizing and analyzing them, and then publishing them on the YanukovychLeaks website, thereby exposing the system of corruption operated by the former President.”

I would like to stress three points in recognizing YanukovychLeaks. 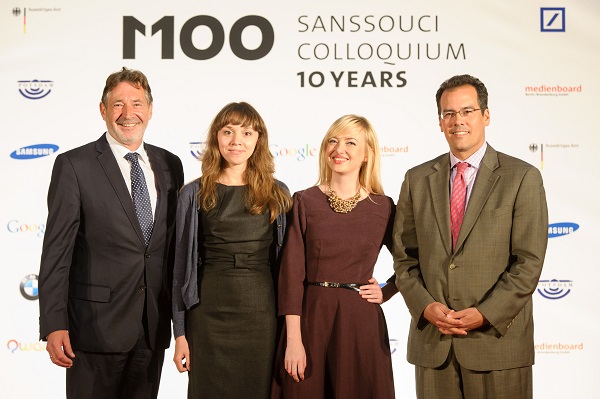 The first relates to the corruption is at the heart of Ukraine’s challenge to reform and which the YanukovychLeaks project has documented in such an important way.

I would like to take this opportunity to recognize two of the courageous YanukovychLeaks representatives who are here with us this evening: Natalie Sedletzka and Kateryna Kapliuk.

Deeply entrenched corruption has been a profound challenge since Ukraine achieved its independence more than two decades ago. But in the four years that he was in power, former President Viktor Yanukovych took the country’s corruption to new heights, enabling the theft of an extraordinary amount of Ukraine’s public wealth.

As the analyst Anders Aslund has observed, nearly $40 billion was stolen from the state while Yanukovych was in power. And this figure may well be an underestimation. This massive corrupt enterprise directed wealth primarily to the president, his relatives, and a limited circle of businessmen around the president.

The vast web of corruption used a variety of elaborate methods to divert state resources. These included lucrative schemes connected to the natural gas market. They also included the manipulation of large infrastructure projects, such as those connected with the Euro 2012 soccer championship. More generally, the government engaged in a range of other schemes to put public wealth into private hands.

This systematic corruption has ravaged Ukraine and has been central to its population’s determination to steer a different course.

These ambitions have been terribly complicated by the conflict instigated by Russia in Ukraine, which among other things has forced Ukraine’s authorities to divert attention from urgently needed domestic reforms.

Because of this, the central story of Ukraine’s aspirations for an accountable governance system based on the rule of law, and which combats corruption, has been overshadowed by the conflict that continues to tear at the fabric of Ukrainian society.

At a time when so much of the discussion about Ukraine is manufactured through spin and the twisting of information, YanukoychLeaks has the important virtue of laying bare the corrupt system through documentation of hard evidence.

In this respect, YanukovychLeaks is so deeply valuable because it is real. It is evidence based. It is not a creation of state media propagandists. It is, in fact, precisely the sort of information that never sees the light of day in closed authoritarian systems. 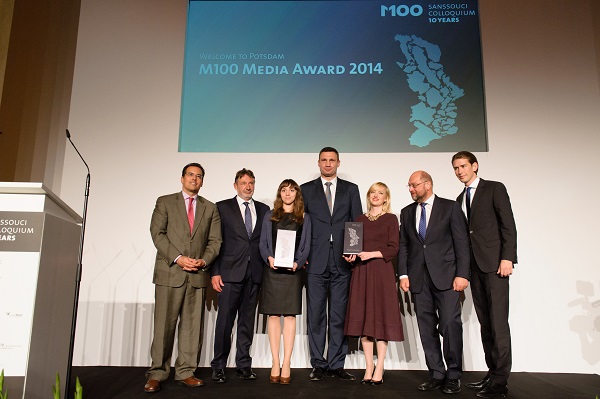 The governance systems that dominate in the countries to the east of the European Union operate on the basis of keeping their citizens in the dark, preventing them from understanding how public policies are determined and how state wealth is used.

During its time in power, the previous government in Ukraine was steadily working to close public space and to govern in the darkness.

And the people around the former president who heaped documents by the thousands into the water behind the presidential residence – which was really a palace – had the aim of relegating these documents to the bottom of the river where they would disappear into the darkness in the same way that so much of Ukraine’s public wealth has vanished.

By taking action quickly, skillfully, and with great determination, YanukovychLeaks saved so many of these documents to ensure that they would they would see the light of day and be available for public scrutiny.

My third and final point is that YanokoychLeaks represents something bigger. Its work is fundamentally about transparency, accountability, and ensuring that citizens can have a say in their country’s governance. In this regard, YanukoychLeaks serves as an emblem of Ukraine’s aspirations to steer a European course.

Not long ago, the Wall Street Journal’s Matthew Kaminski eloquently wrote that “since the Cold War ended, only those fortunate enough to choose their political systems and allies have found peace and stability in Europe. Ukraine wants to join them.”

In the spirit of the work being done by YanukovychLeaks, let us work toward this goal.

For all of the reasons I have mentioned, YanukovychLeaks is greatly deserving of this recognition and special award.

Ukraine: The Maidan and Beyond

"Ukraine: The Maidan and Beyond" Sponsored by the International Forum...

View
Solidarity with Ukraine and Defense of Democracy Worldwide

Utilizing its strong position as a dominant energy supplier to the EU and former...