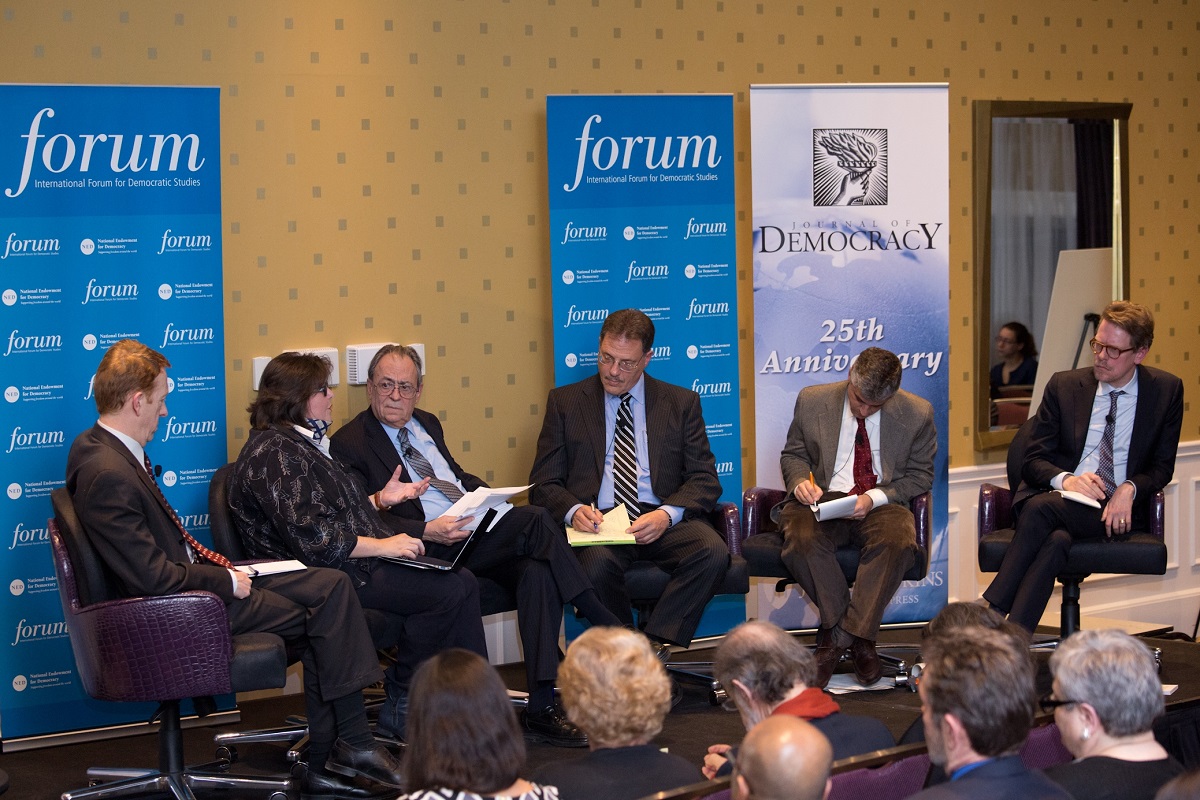 This issue of Worth Reading features three articles from the January 2015 Journal of Democracy–the Journal’s twenty-fifth anniversary issue–discussing the question, “Is Democracy in Decline?” In an essay by the same name, Journal Co-Editor and Research Council Co-Chair Marc F. Plattner summarizes the different perspectives through which this question has been considered. In “The Myth of Democratic Recession,” Research Council Members Steven Levitsky and Lucan Way argue that democracy’s decline has been exaggerated. Journal Co-Editor and Research Council Co-Chair Larry Diamond responds to Levitsky and Way in his piece, “Facing up to the Democratic Recession.” In “Democracy Aid at 25: Time to Choose,” Research Council Member Thomas Carothers explores the significance of democratic decline for democracy promotion. Finally, in “The Splintering of Postcommunist Europe,” Research Council Member Alina Mungiu-Pippidi examines the different trajectories of Europe’s postcommunist states from a geopolitical perspective.

“Is Democracy in Decline?” by Marc F. Plattner

In “Is Democracy in Decline?,” Journal of Democracy Co-Editor and Research Council Co-Chair Marc F. Plattner reviews the Journal’s featured essays on the “Democratic Recession.” Plattner notes that as measured by Freedom House, the trajectory of political freedom is not really in dispute–it has, on average, declined modestly since the turn of the millennium. Despite this modest decline, Plattner writes, deep and widespread doubts about democracy’s future arise from three sources: the growing sense of economic and political fragility in advanced democracies, the rise of confident and assertive authoritarian great powers, and the shifting geopolitical balance between these two camps. Plattner concludes that this sense of decline is not irreversible, noting that democracy has faced moments of crisis before. However, he writes that safeguarding democracy’s future will require its supporters to “summon the resolve and seriousness of purpose needed to reverse” the current period of decline.

In “The Myth of the Democratic Recession,” Research Council Members Steven Levitsky and Lucan Way argue that this sense of democratic decline is mistaken. Drawing on four quantitative measures of democracy, Levitsky and Way suggest that declines in freedom have mostly occurred in places where democracy was never really consolidated in the first place. Rather than democratization followed by democratic breakdown, they posit that after the Cold War many countries experienced a moment of “pluralism by default” in which economic crises, political instability, and ethnic violence left the systems in those countries without “even minimal capacity to resist” competitive multiparty elections. As these conditions changed, previously authoritarian regimes regained the capacity to resist democratization, while political space that temporarily opened began to close. Levitsky and Way conclude by noting that “in several important countries [such as Brazil, India, and Chile,] democracy not only survived but strengthened during the 2000s.”

“Facing up to the Democratic Recession” by Larry Diamond

In “Facing up to the Democratic Recession,” Journal of Democracy Co-Editor and Research Council Co-Chair Larry Diamond responds to Levitsky and Way’s argument. Diamond identifies four trends–incremental decline in middle-performing countries, deepening authoritarianism in the most repressive states, democratic breakdown in several important emerging-market countries, and dysfunction and self-doubt in the democratic world–which are contributing to “at least [an] incipient decline in democracy.” Using Freedom House data to better illustrate the erosion of political rights and civil liberties worldwide from 2005 to 2014, Diamond makes the case that failure to check corrupt and power-hungry governments, the resurgence of assertive authoritarian powers on the global stage, and the decline of US vitality and self-confidence have contributed to a “democratic recession.” Diamond notes that while democracy has declined over the past decade, there has not been a third “reverse wave” such as those following the first and second waves of democratization. Given this situation, Diamond concludes by advising the international community to focus on consolidating the remaining “third-wave” democracies, “the majority of which remain illiberal and unstable.”

“Democracy Aid at 25: Time to Choose” by Thomas Carothers

In “Democracy Aid at 25: Time to Choose,” Research Council Member Thomas Carothers describes how democracy aid organizations have adapted over the past two and a half decades, summarizes the challenges facing this new type of aid, and suggests that the field of democracy assistance itself is at a crossroads. Carothers sorts democracy assistance into three categories: election monitoring and political party development, strengthening of key state institutions, and support for independent civil society. He argues that over time, all three of these categories have improved their programs by broadening their range of activities and varying their programmatic content according to each country’s unique situation. However, he also notes that a series of new challenges have emerged, including the loss of democratic momentum, increasing recipient government hostility, political dysfunction in Western democracies, and decreased buy-in from political leaders at home. Going forward, Carothers believes that the democracy assistance community will have to choose between limiting its work to “safe” forms of aid or articulating the case for more “principled, persuasive prodemocracy diplomacy” as they adapt to new, risky political realities.

“The Splintering of Postcommunist Europe” by Alina Mungiu-Pippidi

In “The Splintering of Postcommunist Europe,” Research Council Member Alina Mungiu-Pippidi explores the role of geopolitics in the divergent transitions of postcommunist Europe. She begins by examining two alternative variables, nationalism and EU accession, finding that both fail to explain Central and Eastern Europe’s differing trajectories. In some countries, including Estonia and Poland, anti-communist nationalism was an essential tool for reform-minded political forces, while in others, such as Romania, nationalist demands from minority groups offered communist parties a “survival strategy.” She finds the effects of EU accession to be similarly varied, with some elites pursuing membership in order to initiate reforms and others seeking to privatize previously public assets. Noting that EU attempts to ‘enforce democracy’ often backfire, Mungiu-Pippidi identifies the geopolitical border demarcating areas of EU and Russian influence as the variable truly responsible for these divergent paths and predicts that political differences across this border will continue to grow.

You can also read the Center for Independent Media Assistance’s interview with Marc F. Plattner on this subject, available here.

The International Forum is also revisiting a small selection of the most influential Journal essays. These include “Democracy’s Third Wave” by Samuel P. Huntington, “What Democracy Is…And Is Not” by Research Council Member Philippe C. Schmitter and Terry Lynn Karl, and “The Rise of Competitive Authoritarianism” by Research Council Members Steven Levitsky and Lucan A. Way.

Congratulations to the Journal on twenty-five years at the forefront of democracy research!

Worth Reading is a list of featured readings on democracy disseminated semi-monthly by the International Forum for Democratic Studies at the National Endowment for Democracy. Many thanks to Marc F. Plattner, Larry Diamond, Lucan Way, Steven Levitsky, Thomas Carothers, and Alina Mungiu-Pippidi for their insight and analysis; thanks also to the Journal of Democracy staff for their work on the twenty-fifth anniversary issue. If you have an item you would like considered for inclusion in Worth Reading, please send us an email at ndri@ned.org.