The Al-Khatim Adlan Centre for Enlightenment and Human Development (KACE), a NED partner in Sudan since 2007, has done its best to test the limits of the greater political openness envisioned by Sudan’s Comprehensive Peace Agreement. Founded in memory Al-Khatim Adlan, one of Sudan’s great progressive political thinkers, KACE is committed to finding democratic answers to Sudan’s long-entrenched conflicts. 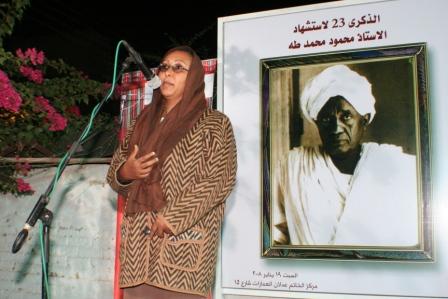 This commitment could be seen in the months before Sudan’s national elections in April 2010, when KACE led in the formation of a consortium of more than 100 civil society organizations, TAMAM, which was successful in gaining accreditation from the National Elections Commission to conduct domestic monitoring.

With assistance from NED and the Carter Center, TAMAM trained 86 area coordinators responsible for a total of 1,931 local observers, who were deployed throughout northern Sudan. The elections were peaceful, but due to a suspicious census and registration process – documented by TAMAM – many of the leading opposition parties boycotted the process, and the elections failed to garner much legitimacy. TAMAM issued a sharply critical report following the elections. Despite disappointment with the elections, however, the stakes in the subsequent referendum for self-determination in southern Su¬dan were even greater, and both KACE and TAMAM mobilized to facilitate a peaceful and open process.

During the interim between the two elections, KACE held a series of symposiums in Khartoum evaluating the elections, as well as on topics such as “Risks and Impact of Southern Secession,” “Obstacles to Popular Consultation in the Nuba Mountains,” and “Increasing the Chances of Voluntary Unity.” KACE also held a series of training workshops on the popular consultations and Abyei referendum, issues that will remain unresolved after the referendum and could either help or hinder Sudan’s political development. KACE organized a wide-ranging program of cultural events as well, such as music concerts and a film series. KACE activities were well-attended by participants from across Sudan’s political spectrum, including the Justice, Baath, Umma and Sudan Peoples’ Liberation Movement parties.

In October, KACE launched a campaign called Citizenship Rights and People Unity, urging the recognition of dual nationality for northern and south¬ern Sudanese; respect for freedom of movement, residence, ownership and work; and, in general, tolerance for southerners living in the north and northerners living in the south. With as¬sistance from the US Institute for Peace, KACE held a two-day conference on “Searching for Lasting Peace for Darfur,” which generated an important report and recommendations, and received considerable national and international press.

With the emergence of South Sudan as its own country, KACE organized a conference in Khartoum in May 2011 entitled, “The Future of the Two Sudans: Transition into Post-Referendum.” About 100 academics, jurists, civil society leaders, writers, scholars, and journalists attended. The conference, aimed at reducing tensions by encouraging dialogue and peaceful discussion, tackled vital issues of concern during the final phase of the Comprehensive Peace Agreement. The conference was a confirmation of KACE’s commitment to develop democratic modes of behavior and to reinforce peaceful and civilized debate amongst different groups and sectors of the society.

Read about NED programs in Sudan and South Sudan. END_OF_DOCUMENT_TOKEN_TO_BE_REPLACED

The July 2011 issue of the Journal of Democracy includes the article, “Strife and Secession in Sudan,” by Khalid Mustafa Medani. Available free online. END_OF_DOCUMENT_TOKEN_TO_BE_REPLACED

With NED support, the Community Media...

The October 2018 issue of the Journal of Democracy...

Belarus on the Eve of Elections,...

In the Journal of Democracy's April 2020 issue, contributors review the records...