The Embassy of Canada and the National Endowment for Democracy presented the seventeenth annual Seymour Martin Lipset Lecture on Democracy in the World. 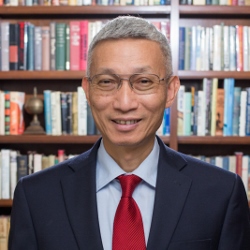 Dr. Minxin Pei is the Tom and Margot Pritzker ’72 Professor of Government and George R. Roberts Fellow at Claremont McKenna College. He is also a non-resident senior fellow of the German Marshall Fund of the United States. He serves on the editorial board of the Journal of Democracy and as editor-in-chief of the China Leadership Monitor. Prior to joining Claremont McKenna in 2009, Dr. Pei was a senior associate and the director of the China Program at the Carnegie Endowment for International Peace.

Dr. Pei’s op-eds have appeared in the Financial Times, New York Times, Washington Post, Newsweek International, and other major newspapers. Dr. Pei received his Ph.D. in political science from Harvard University. He is a recipient of numerous prestigious fellowships, including the National Fellowship at the Hoover Institution at Stanford University, the McNamara Fellowship at the World Bank, and the Olin Faculty Fellowship of the Olin Foundation.

The Seymour Martin Lipset Lecture on Democracy in the World was inaugurated in 2004 by the International Forum for Democratic Studies at the National Endowment for Democracy (NED) and the Munk School for Global Affairs at the University of Toronto as an important new forum for discourse on democracy and its progress worldwide. View past lectures on key issues of democracy.

New CIMA Report: Beyond the Great...

Johan Lagerkvist is professor of Chinese language and...

Tibet and the Belt and Road Initiative:...