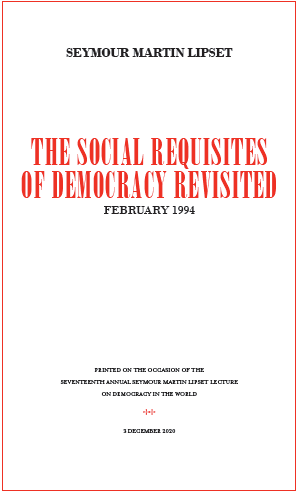 “In this paper I discuss the factors and processes affecting the prospects for the institutionalization of democracy throughout the world. I survey cultural and economic variables, religious traditions, various electoral systems, the importance of a participatory civil society, and the methods through which political parties should be structured to maintain stability. I conclude that, because new democracies have low levels of legitimacy, there is a need for considerable caution about the long-term prospects of their stability. In many countries during the 1980s and early 1990s, political democratization occurred at the same time as a profound economic crises. Such conditions have already caused the breakdown of democratization in a number of countries. To attain legitimacy, what new democracies need above all is efficacy, particularly in the economic arena, but also in the polity. If they can take the high road to economic development, they can keep their political houses in order. The opposite is true as well: Governments that defy the elementary laws of supply and demand will fail to develop and will not institutionalize genuinely democratic systems.” 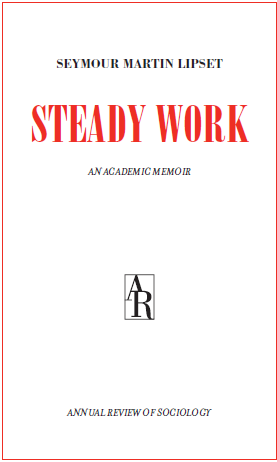 “My work on democracy, which had begun with Union Democracy (1953) and was continued subsequently with The First New Nation (1963), extended in a curious way some of my earlier efforts as a young socialist at comparative political analysis. I used to give lectures on the reasons for the failure of the revolution and the socialist movement in different countries. I discussed why the Nazis triumphed in Germany, the Francoists in Spain, why the British Labour party failed to inaugurate socialism, and so forth. This concern for the failure of social democracy or the conditions for the success of socialism was in a sense transmuted into analyses of the transition to democracy in comparative perspective, a subject that continues to be a major interest. My most important book on the subject is Political Man: The Social Basis of Politics, which appeared in 1960. Political Man basically is a comparative study of the democratic order. In it, I reported my effort at a quantitative analysis of the factors differentiating democratic countries from undemocratic ones; this was first published as an article in the American Political Science Review (1959). The quantitative methods employed were primitive by contemporary standards, simply arithmetic and percentages. Still, I was able to document that the emergence and spread of democracy were related to socioeconomic development, to changing occupational and class structures, to higher per capita income, to widespread diffusion of education, to social homogeneity, and other factors. The book takes off from Aristotle, from his generalization that democracy is most likely to be found in polities with a large middle class. Inegalitarian countries are more disposed to be either oligarchies or tyrannies, i.e. old fashioned dictatorships or modern totalitarian systems.”

Democracy Research News is the electronic newsletter of the Network of Democracy...

Please join us for a discussion on “Democratizing...