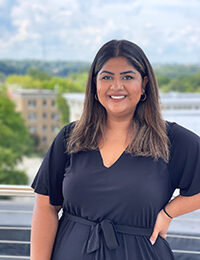 Angel Sharma is a Program Officer for the US Department of State’s Bureau of Democracy, Human Rights, and Labor and the Office of International Religious Freedom where she administers multi-million-dollar programs across the globe focused on supporting religious freedoms. Prior to her current role, Angel was at the International Republican Institute’s Center for Global Impact team as a Senior Governance Specialist/Manager serving as the technical lead on freedom of religion, expression, local governance, and anti-corruption issues. In this role, she designed and led trainings for local government officials, political parties, and civil society in Guatemala, Iraq, Malaysia, the Maldives, and several countries in Southern Africa. She also managed the South and Southeast Asia portfolio at the American Bar Association’s Rule of Law Initiative (ABA ROLI) where she managed programs regarding access to justice, legal strengthening, transitional justice, anti-human and illicit drug trafficking, and anti-corruption in Laos, Pakistan, Malaysia, Sri Lanka and Thailand. Angel supported international exchange programs at FHI360 earlier in her career and is a 2016 Young Professionals in Foreign Policy Fellow, through which she published op-eds in the Diplomat, the Huffington Post, and the Diplomatic Courier. Angel has held prestigious internships at the Supreme Court of India in New Delhi and the World Affairs Council of Dallas/Fort Worth. She is currently a Board Member with Desis for Progress, a DC-based non-profit aimed at empowering South Asian Americans to vote and participate in US elections. Angel graduated with her M.A. in International Affairs from American University and a B.A. in International Relations & Asian Studies from the University of Texas at Austin. She is fluent in Hindi/Urdu and conversational in Spanish.