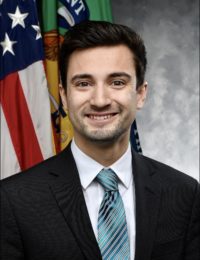 Anthony Musa serves as a Sanctions Licensing Officer at the U.S. Department of the Treasury at the Office of Foreign Assets Control (OFAC). Musa assists applicants with the investigation of funds that were blocked due to a sanctions nexus related to the Counter-terrorism and North Korea sanctions programs. Prior to joining OFAC, Musa worked for Congressman Jimmy Panetta in California’s 20th Congressional District in California’s Central Coast. He also worked for the United Nations Office on Disarmament Affairs on WMD related issues and the Center for Nonproliferation Studies on issues related to sanctions and trade policy. In addition to his professional experience, Musa currently serves in the U.S. Army National Guard and the Commission on Latino Community Development for the D.C. municipal government. He has a B.A. in Political Science and International Relations from Arizona State University and an M.A. in Nonproliferation and Terrorism Studies from the Middlebury Institute of International Studies at Monterey. At Middlebury, he wrote his master’s thesis on the utilization of 3D printing to evade WMD related sanctions.