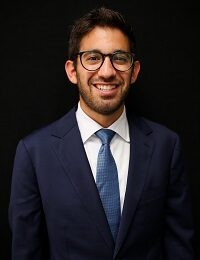 Benjamin Talus is the Foreign Policy Advisor for Congressman Jerry Nadler, Chairman of the House Judiciary Committee. He previously served as Senior Policy Advisor for Congresswoman Donna Shalala, overseeing her foreign affairs legislative agenda, among other issues. Prior to working on Capitol Hill, Ben served in various roles at the Clinton Foundation in New York City, where he managed communications for its international programs and the Office of President Bill Clinton’s foundation-related efforts. Ben holds a BS in Foreign Service from Georgetown University, and he is currently pursuing a Doctor of International Affairs degree from the Johns Hopkins School of Advanced International Studies, where his research centers on the relationship between US foreign policy and domestic electoral politics. He has served as a fellow in the Atlantic Council Adrienne Arsht Latin America Center’s Venezuela Congressional Fellowship and was a member of the Council on Foreign Relations’ Congressional Foreign Policy Study Group.