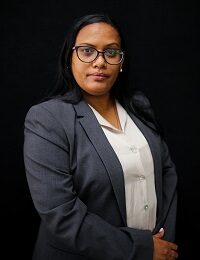 Dunia Mekonnen Tegegn is a human rights lawyer who has been working with the American Bar Association’s Center for Human Rights where she coordinated the Center’s work on Ethiopia through close collaboration with Ethiopia’s Democracy and Human Rights CSOs to ensure human rights are prioritized and protected within the criminal justice system.  Prior to this role, Dunia worked with Amnesty International USA as an Almami Cyllah Fellow where she anchored the work on Nigeria, spearheading efforts to challenge the Nigerian government’s actions violating the human rights of individuals through coordinating and leading meetings with Congressional offices, presenting on panels on Freedom of expression and leading on the coordinating role on behalf of jailed journalist and others. Her work resulted in statements issued by members of the House and Senate and a journalist being added to the Defending Freedoms Initiative of the Tom Lantos Human Rights Commission. She also supported the introduction of a bill expressing concern over the shrinking civic space in Nigeria. Dunia has also been working in a remote capacity as a media rights researcher with The Collaboration on International ICT Policy in East and Southern Africa (CIPESA) on access to information, internet shutdowns, and Privacy issues. In her home country Ethiopia, Dunia worked with the United Nations High Commissioner for Human Rights Eastern Africa Regional Office (OHCHR EARO), the United Nations Agency for Gender Equality and Women’s Empowerment and the United Nations Children’s Fund. Through these roles, she supported the work of the African Union’s Social Affairs and Political affairs departments. Dunia was also admitted as a lecturer of law at Haramaya University Law School and has taught law in several universities in her country. In 2016, Dunia was named as the first Ethiopian/African woman to receive a National Security LLM with distinction from Georgetown University’s Women’s Law and Public Policy Program.  Dunia received her Bachelor of laws degree from Bahirdar University, Ethiopia and her master’s degree in Human Rights from Addis Ababa University.