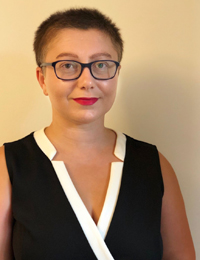 Nana Sajaia is an award-winning journalist and producer with a focus on the Post-Soviet region. A native of Georgia, currently she is a producer at the Fox News politics unit in the D.C Bureau. Nana has previously worked as an International Broadcaster at the Voice of America Georgian Service, where she covered Georgia and Eurasia-related topics for different media platforms in Georgian and English languages. She has extensively reported on major regional political developments, elections in Georgia and Ukraine, Russia’s occupation of Georgian territories, U.S.-Georgia relations, Eastern European partnership, NATO enlargement, and Kremlin disinformation in the Caucasus and Eurasia. Nana received a BA in English language from Tbilisi State University, and an MA in journalism and media management from Georgian Institute of Public Affairs (GIPA). In 2007 she was selected as a Edmund S. Muskie Graduate Fellow and did her Master’s studies in Journalism and Mass Communication at North Dakota State University. Nana has been practicing journalism for more than ten years now, served as an editor of local publications such as Georgia Today and weekly political magazine Liberali, and has worked for international media outlets in the region such as BBC World Service, France 24, and TOL. Before joining Fox News, Nana was a researcher at PEN American Center – a worldwide association of writers, defending freedom of expression and supporting persecuted writers.