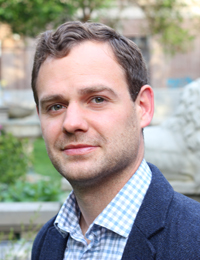 David Szakonyi is Assistant Professor of Political Science at the George Washington University, an Academy Scholar at Harvard University, and a Research Fellow at the Higher School of Economics in Moscow, Russia. His research interests include political economy, authoritarian regimes, corruption, and non-market strategy, with current projects underway in Russia and the United States. His book Politics for Profit: Business, Elections, and Policymaking in Russia (forthcoming at Cambridge University Press) investigates the widespread yet understudied practice of businesspeople running for and winning elected office. Using a variety of new quantitative datasets to identify connections between politicians and firms in Russia, the book demonstrates how businesspeople use their time in government to increase their firms’ profitability, fight off market competitors, and shape budgets and public policy to benefit the wider business community. His other work has been published in the American Political Science Review, World Politics, and Journal of Politics, as well as popular publications such as Foreign Affairs, Washington Post, Newsweek, and the Moscow Times. In addition to his academic scholarship, David is partnering with Transparency International and several other international NGOs to apply big data techniques for investigating cross-border money laundering and corruption. David received his PhD in political science from Columbia University and his BA from the University of Virginia.