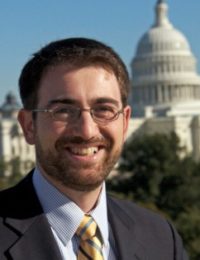 Ethan Saxon was appointed the Democratic Staff Director of the Senate Committee on Veterans Affairs in 2015, after having served as the Legislative Director and foreign policy advisor for Senator Richard Blumenthal (D-CT).  Ethan helped draft the Senator’s first veterans’ bill, the Honoring All Veterans Act through to his most recent, the Veterans First Act. Previously, Ethan served as an Analyst on the Commission on the National Guard and Reserves and the 2005 Base Closure & Realignment Commission. From 2002 to 2005, Ethan was a Military Legislative Assistant to Congressman Jim Maloney (D-CT) and then Congresswoman Madeleine Bordallo (D-Guam), both members of the House Armed Services Committee.