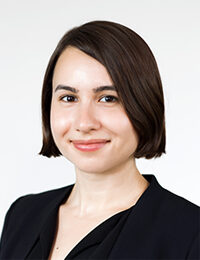 Karen Karnicki is a program officer for the Rockefeller Brothers Fund’s Peacebuilding program, focusing on grantmaking related to Afghanistan, as well as refugees and forced migration. Karen joined the RBF in 2015 as the program assistant for the Peacebuilding and Western Balkans programs. Prior to joining the RBF, Karen was an intern at UN Women, where she conducted research to support efforts to mainstream gender within the intergovernmental processes of the UN system. In 2014, she joined the team at Rhize, a nonprofit that seeks to build the capacity of grassroots social movements around the world by connecting them to skills, strategies, and networks. Karen also worked as an ESOL teacher in Prague, Czech Republic, and for the Islamic Civilization & Societies program at Boston College. She currently serves on the Steering Committee of the Peace and Security Funders Group. Karen holds a Master of Arts in human rights studies with a concentration in gender and transitional justice from Columbia University, as well as a B.A. from Boston College, where she double majored in Slavic studies and Islamic civilization & societies.