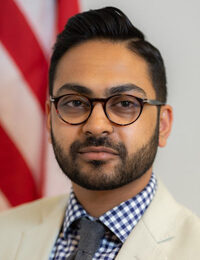 Sahil Jain is a Foreign Service Officer who most recently served at the U.S. Consulate General in Mumbai.  He began his career at the U.S. Department of State in the Office of Israeli-Palestinian Affairs.  Subsequently, he joined USAID assisting with the launch of the Global Development Lab Bureau.  He then returned to the Department of State, where he served as a country officer in the Bureau of Consular Affairs and an Acting Branch Chief assisting on Hague Convention treaties.  Sahil also served as a Legislative Assistant covering foreign affairs under Congressman Ami Bera.  He is a recipient of the Department of State’s Franklin, Meritorious, and Superior awards.  Sahil holds a Master’s of International Affairs from the George Washington University, a Bachelor’s of International Relations from Syracuse University, and an executive certificate from Princeton University.  He speaks Hindi, Punjabi, and Spanish.