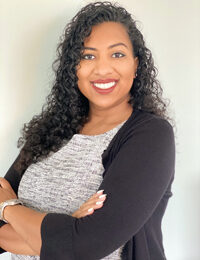 Victoria A. Durgana Latortue joined the U.S. Department of State in 2017. She is a proud recipient of the Thomas R. Pickering Foreign Affairs Graduate Fellowship and the United Nations Association Graduate Fellowship. As a Pickering Fellow, Victoria served as an Economic Assistant at U.S. Embassy Kuala Lumpur where she worked on climate change, countering wildlife trafficking, and U.S.-Malaysia economic relations and as a Political Assistant in the State Department’s Office of Arabian Peninsula Affairs where she covered conflict resolution and humanitarian efforts in Yemen. After joining the State Department, Victoria worked as a Political Officer at U.S. Embassy Algiers where she covered presidential elections, human rights, and religious freedom. She most recently served as Desk Officer for Algeria and Libya in Washington, D.C. Prior to joining the government, Victoria worked at George Washington University’s Elliott School of International Affairs’ Institute for Security and Conflict Studies. Victoria also graduated from the Elliott School with an MA in Security Policy Studies and a focus on Nuclear Security Policy and Conflict Resolution in Africa and from New York University with a BA where she triple-majored in Politics, Economics, and Middle Eastern and Islamic Studies. Victoria speaks French and Arabic and is learning Hebrew for her next diplomatic post as Vice Consul at the U.S. Embassy Branch Office in Tel Aviv. She is a first generation Guyanese American from Piscataway, NJ.