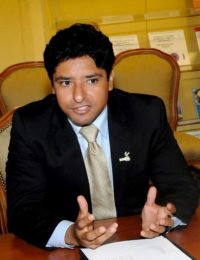 Osvaldo Gómez Martínez (PhD) is an international economist team lead for Latin America and the Caribbean with the U.S. Foreign Agricultural Service (FAS). From 2010-2014, Osvaldo was a U.S. diplomat with the Department of State. As an alternate representative to the U.S. Permanent Mission to the Organization of American States (OAS) and member of the Presidential Summit of the Americas U.S. team, Osvaldo spearheaded multilateral negotiations on a wide range of economic and security issues. Throughout his tenure, Osvaldo successfully negotiated U.S. interests on political declarations and resolutions in five OAS Ministerials, four OAS General Assemblies, and the 2012 and 2015 Summit of the Americas. As a multilateral affairs advisor for the U.S. Department of State Bureau of Counterterrorism Office of Multilateral Affairs, Osvaldo was also responsible for advising and coordinating federal inter-agency efforts defining and advancing U.S. policy and programmatic interests on counterterrorism issues within the OAS, the Asia-Pacific Economic Cooperation (APEC), the Group of Eight (G8), and the United Nations Security Council Counterterrorism Committee (UN).