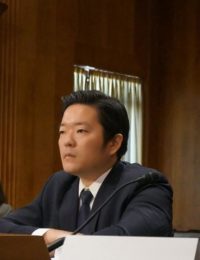 Russell Hsiao is the Executive Director of the Global Taiwan Institute. He previously served as a Senior Research Fellow at the Project 2049 Institute and National Security Fellow at the Foundation for Defense of Democracies. Prior to those positions he was the Editor of China Brief at The Jamestown Foundation from October 2007 to July 2011 and a Special Associate in the International Cooperation Department at the Taiwan Foundation for Democracy. While in law school, he clerked within the Office of the Chairman at the Federal Communications Commission and the Interagency Trade Enforcement Center at the Office of the U.S. Trade Representative. Mr. Hsiao received his J.D. and certificate from the Law and Technology Institute at the Catholic University of America’s Columbus School of Law where he served as the Editor-in-Chief of the Catholic University Journal of Law and Technology. He received a B.A. in International Studies from the American University’s School of International Service and the University Honors Program. Mr. Hsiao is proficient in Mandarin Chinese.