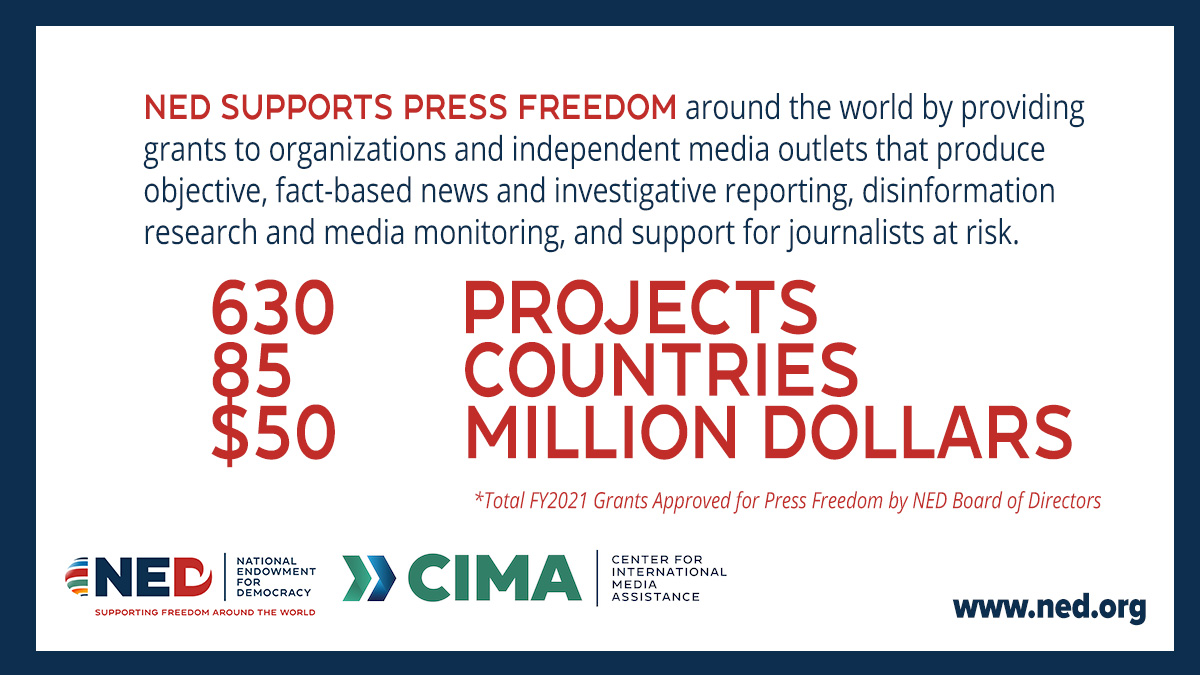 “In the last five years, 85 percent of the world’s population has experienced a decline in press freedom in the countries where they reside,” said Nick Benequista, senior director of the Center for International Media Assistance (CIMA) at the National Endowment for Democracy (NED) during a recent NED event highlighting journalism on the frontlines of the struggle for freedom. “Trust in news and public support for freedom of expression are fragile in every region of the world.”

As journalists confront autocrats, war and conflict, and other dangers, NED provides vital assistance to partners around the world who are working to safeguard democracy—including independent media, freedom of information, and access to technology—in some of the world’s most critical environments. NED established CIMA in 2006 to support independent media in developing countries, and since then, CIMA has emerged as a global thought leader on media development, the digital sphere, and their connection to democracy. [Expore the mission and work of CIMA.]

“Supporting freedom of information and independent media is a top priority of the National Endowment for Democracy,” said NED President and Chief Executive Officer Damon Wilson when honoring the legacy of Fred Hiatt, longtime editor of The Washington Post editorial page who gave voice to aspiring democrats around the world. This past year, NED awarded 50 million dollars for 630 projects across 85 countries for independent media outlets and civil society organizations focused on disinformation research and media monitoring, advocacy and legal assistance, and digital technology tools.

Wilson says, “Independent media and journalists are at the core of what makes a healthy democracy—providing accurate information to citizens about what’s happening in their own country, whether democratic or authoritarian; providing news to the outside world, especially in closed societies or conflict; developing the public’s resilience and ability to counter disinformation; investigative journalism that exposes corruption and other abuses provides accountability; and simply to give a forum for open debate and sharing ideas.”

READ ABOUT NED’S SUPPORT FOR PRESS FREEDOM AROUND THE WORLD.