On Saturday, February 15, 2020 at the Munich Security Conference, global thought leaders and experts on disinformation will launch a new report, “Firming Up Democracy’s Soft Underbelly: Authoritarian Influence and Media Vulnerability,” written by Edward Lucas.  The report explores how Russia, China, and other authoritarian regimes have invested billions of dollars in media enterprises and information initiatives to manipulate, distort, and censor the global information environment. The report is the first of a series of publications to be released in the coming months as part of the International Forum for Democratic Studies’ new Sharp Power and Democratic Resilience initiative. 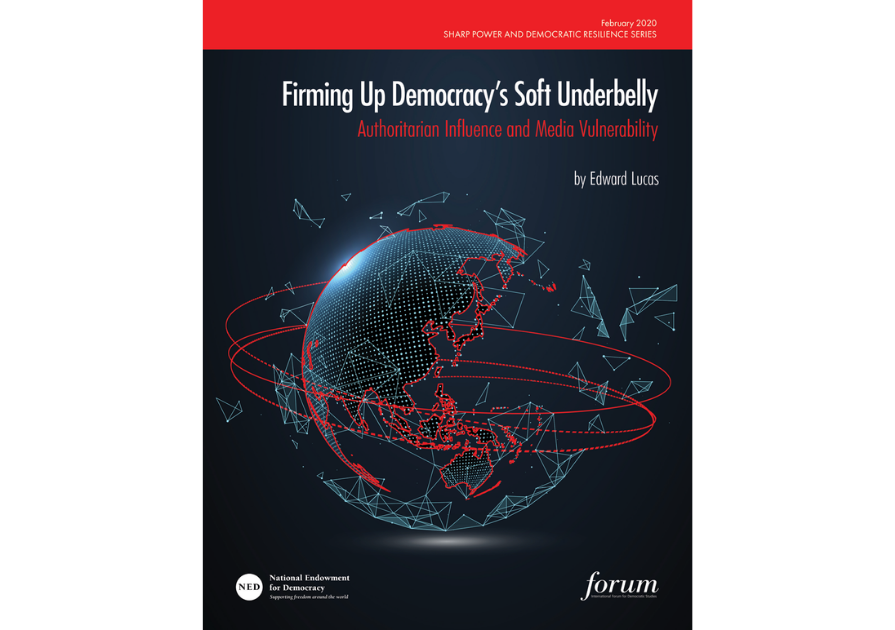 , the President and CEO of the Center for European Policy Analysis (CEPA), will moderate the panel discussion featuring author Edward Lucas of CEPA, Christopher Walker from the National Endowment for Democracy (NED), award-winning journalist Anne Applebaum, and Teija Tiilikainen from the European Centre of Excellence for Countering Hybrid Threats. The Munich Security Conference is considered to be among the most influential independent forums for international decision-makers from around the world to debate current and future security challenges.

The need to understand the compromising effects of sharp power—which impairs free expression, neutralizes independent institutions, and distorts the political environment—has never been more apparent, as globalization deepens integration between democracies and autocracies. Building upon the ground-breaking past analysis by the International Forum for Democratic Studies, the new Sharp Power and Democratic Resilience series will examine the ways in which leading authoritarian regimes seek to manipulate the political landscape and censor independent expression within democratic settings, and to highlight potential civil society responses. (Read the past research on sharp power here.)

The Sharp Power and Democratic Resilience initiative will focus on emerging issues in four crucial areas relating to the health and integrity of democratic systems:

(Learn more about how democracies are contending with sharp power in Foreign Policy and Foreign Affairs.)

At the Munich Security Conference, the International Forum for Democratic Studies will present the paper in partnership with the Center for European Policy Analysis (CEPA), a non-profit, non-partisan, public-policy research institute that aims to promote an economically vibrant, strategically secure, and politically free Europe with close and enduring ties to the United States.

The National Endowment for Democracy (NED)is a private, nonprofit, grant-making foundation with a mission to strengthen democratic institutions around the world through nongovernmental efforts. With an annual appropriation from the U.S. Congress, the NED Board, which is independent and bipartisan, makes more than 1600 grants each year to support projects that promote political and economic freedom and participation, human rights, a strong civil society, independent media and the rule of law in more than 90 countries. The International Forum for Democratic Studies at NED is a leading center for analysis and discussion of the theory and practice of democracy around the world.

Dr. Alina Polyakova, President and CEO of Center for European Policy Analysis, holds deep expertise on European politics, Russian foreign policy, and digital technologies. Prior to her work at CEPA, she was the Founding Director for Global Democracy and Emerging Technology and a Fellow in the Foreign Policy program at the Brookings Institution, and the Director of Research for Europe and Eurasia at the Atlantic Council, where she developed and led the initiative’s work on disinformation and Russia.

Edward Lucas is a writer and consultant specializing in European and transatlantic security. His expertise also includes energy, cyber-security, espionage, information warfare, and Russian foreign and security policy. Formerly a senior editor at The Economist, he is now the editor of Standpoint Magazine, weekly columnist at The Times, and senior vice president at the Center for European Policy Analysis.

Christopher Walker is Vice President for Studies and Analysis at the National Endowment for Democracy, overseeing NED’s multifaceted analytical work, including the International Forum for Democratic Studies, a prominent center for the analysis and discussion of democratic development. He is an expert on authoritarian regimes and has been at the forefront of the discussion on authoritarian influence on open systems, including through what he has termed “sharp power.”

Anne Applebaum is a staff writer for The Atlantic, covering U.S. politics and foreign policy, with a particular focus on Europe. Previously, she spent 17 years as a columnist for the Washington Post, served as former deputy editor of Spectator magazine, and was a Warsaw correspondent for The Economist. She is also Professor of Practice at the London School of Economics, where she runs ARENA, a research project on disinformation and propaganda, and is a senior fellow at the School of Advanced International Studies at Johns Hopkins.

Traveling to the Munich Security Conference? Find this event in the Dachgarten of the Hotel Bayerischer Hof at 3:30 – 5:00 p.m. on Saturday, February 15, 2020.