About the Sharp Power and Democratic Resilience Series

As globalization deepens integration between democracies and autocracies, the compromising effects of sharp power—which impairs free expression, neutralizes independent institutions, and distorts the political environment—have grown apparent across crucial sectors of open societies. The Sharp Power and Democratic Resilience series is an effort to systematically analyze the ways in which leading authoritarian regimes seek to manipulate the political landscape and censor independent expression within democratic settings, and to highlight potential civil society responses.

This initiative examines emerging issues in four crucial arenas relating to the integrity and vibrancy of democratic systems:

The present era of authoritarian resurgence is taking place during a protracted global democratic downturn that has degraded the confidence of democracies. The leading authoritarians are challenging democracy at the level of ideas, principles, and standards, but only one side seems to be seriously competing in the contest.

Global interdependence has presented complications distinct from those of the Cold War era, which did not afford authoritarian regimes so many opportunities for action within democracies. At home, Beijing, Moscow, and others have used twenty-first-century tools and tactics to reinvigorate censorship and manipulate the media and other independent institutions. Beyond their borders, they utilize educational and cultural initiatives, media outlets, think tanks, private sector initiatives, and other channels of engagement to influence the public sphere for their own purposes, refining their techniques along the way. Such actions increasingly shape intellectual inquiry and the integrity of the media space, as well as affect emerging technologies and the development of norms. Meanwhile, autocrats have utilized their largely hybrid state-capitalist systems to embed themselves in the commerce and economies of democracies in ways that were hardly conceivable in the past.

The new environment requires going beyond the necessary but insufficient tools of legislation, regulation, or other governmental solutions. Democracies possess a critical advantage that authoritarian systems do not—the creativity and solidarity of vibrant civil societies that can help safeguard institutions and reinforce democratic values. Thus, the papers in this series aim to contextualize the nature of sharp power, inventory key authoritarian efforts and domains, and illuminate ideas for non-governmental action that are essential to strengthening democratic resilience. 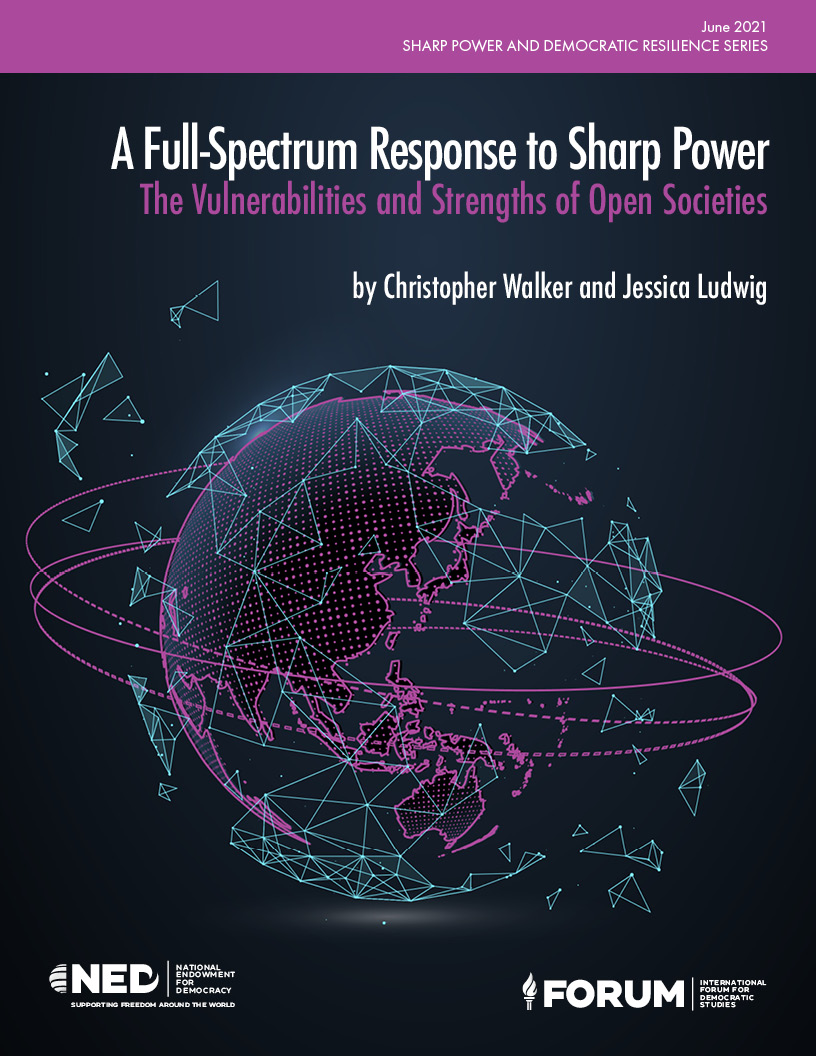 A Full-Spectrum Response to Sharp Power: The Strengths and Vulnerabilities of Open Societies (June 2021)

by Christopher Walker and Jessica Ludwig

The final report in the Sharp Power and Democratic Resilience series reviews the findings of eight papers that highlight serious vulnerabilities in a cluster of institutions related to information and ideas, commerce, media, and technology. During a period in which democracies have been preoccupied with internal problems, authoritarian regimes in Russia, China, and elsewhere have pushed boundaries and successfully exploited these vulnerabilities. Authoritarian powers’ compromising activities in these four sectors, among others, amount to a constant probing of democratic integrity. A response from the full spectrum of institutions within open societies is essential. Actors in the nongovernmental sector—including but not limited to media, universities, publishers, and technology and entertainment firms—must develop strategies for resilience in the face of authoritarian influence that reinforce standards of openness, accountability, and institutional integrity.

Christopher Walker is vice president for studies and analysis at the National Endowment for Democracy, where he oversees NED’s multifaceted analytical work. Jessica Ludwig is a senior program officer at NED’s International Forum for Democratic Studies, where her research focuses on authoritarian influence in emerging democracies.

Media and the information space 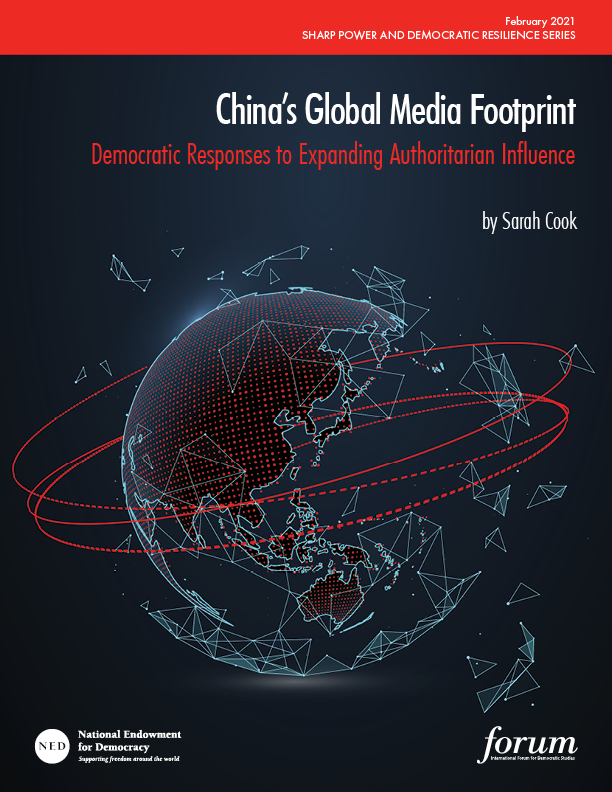 This report describes the Chinese Communist Party’s (CCP) sharp power efforts to shape media content around the world. It also documents how nongovernmental actors contribute to a growing accumulation of activities aimed at countering Beijing’s media influence while protecting democratic institutions. Leveraging propaganda, disinformation, censorship, and influence over key nodes in the information flow, Beijing’s expanding efforts to shape global narratives go beyond simply “telling China’s story.” Their sharper edge undermines democratic norms, erodes national sovereignty, weakens the financial sustainability of independent media, and violates local laws. An acknowledgment and understanding of the challenges that China’s party-state and related actors pose to media freedom globally—not only by China experts, but by the full array of nongovernmental actors engaged in the media, news, and technology sectors—must be central to a comprehensive response.

Sarah Cook is research director for China, Hong Kong, and Taiwan at Freedom House. She directs the China Media Bulletin, a monthly digest providing news and analysis on media freedom developments related to China. Cook is the author of several Asian country reports for Freedom House’s annual publications, as well as four special reports about China. 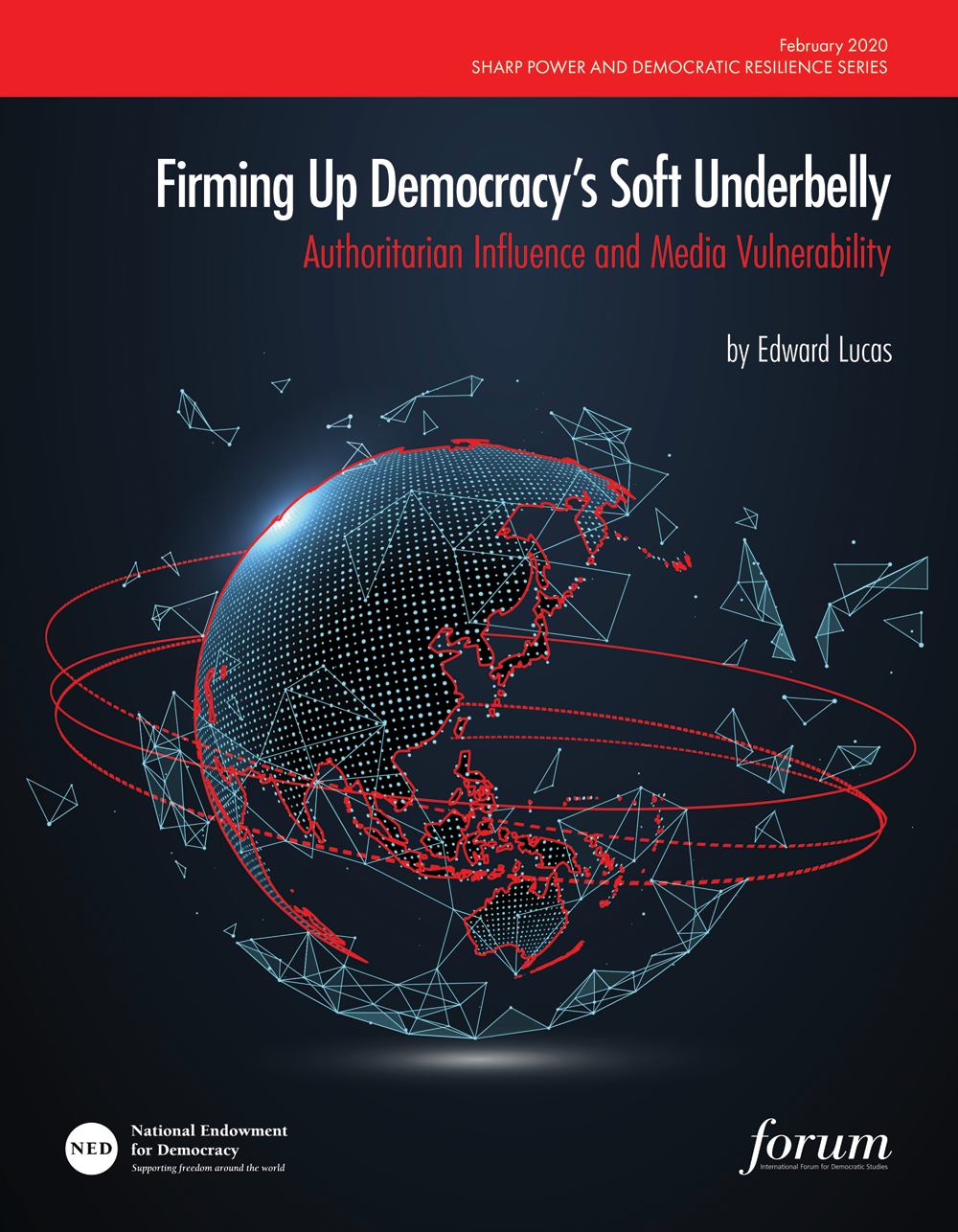 This report explores how the leading authoritarian regimes have exploited democratic norms and transformed the market for information into a dangerous tool to exert antidemocratic sharp power. Under enormous economic and political pressures, independent media are struggling to respond. News outlets face wrenching changes in their business models, driven by technological revolution. And features of the media system once seen only as strengths—such as competition, openness, and fair-mindedness—have also turned out to be weaknesses.

Edward Lucas is a writer and consultant specializing in European and transatlantic security. Formerly a senior editor at The Economist, he is now a senior vice president at the Center for European Policy Analysis and writes a weekly column in The Times. His latest book is Cyberphobia: Identity, Trust, Security, and the Internet. 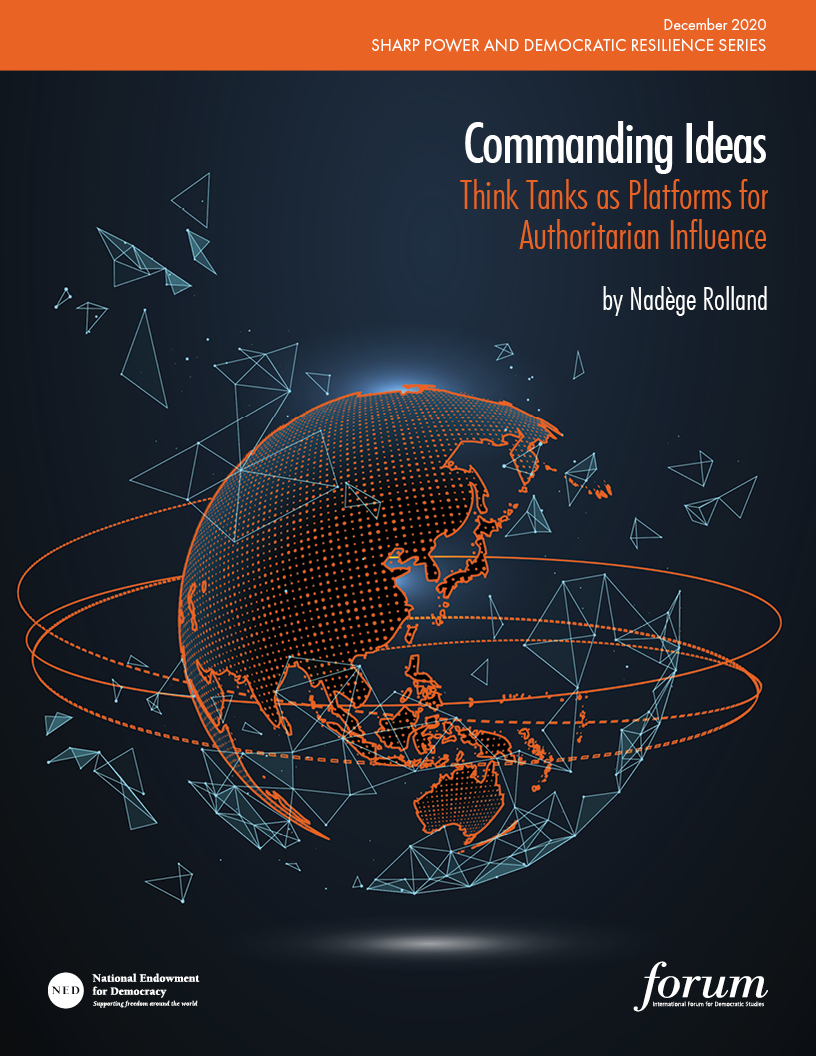 This report describes the ways in which authoritarian countries seek to use think tanks as instruments of sharp power, focusing specifically on why and how authoritarian powers target foreign private organizations dedicated to policy-related research. Authoritarian think tanks operate much like their democratic counterparts—organizing public conferences and events, publishing research in academic journals and on their websites, and sharing analyses with media outlets. But the antiliberal and antidemocratic political systems to which these entities belong repress any form of dissent and claim control over the discursive and ideational space. The overall effect lends regime-backed narratives an artificial legitimacy. Democratic think tanks and other civil society stakeholders have a critical role to play in strengthening democratic resilience and countering authoritarian attempts to undermine intellectual freedom.

Nadège Rolland is senior fellow for political and security affairs at the National Bureau of Asian Research and nonresident fellow at the Lowy Institute. Her research focuses mainly on China’s grand strategy, foreign and defense policy, and the changes in regional and global dynamics resulting from the rise of China. 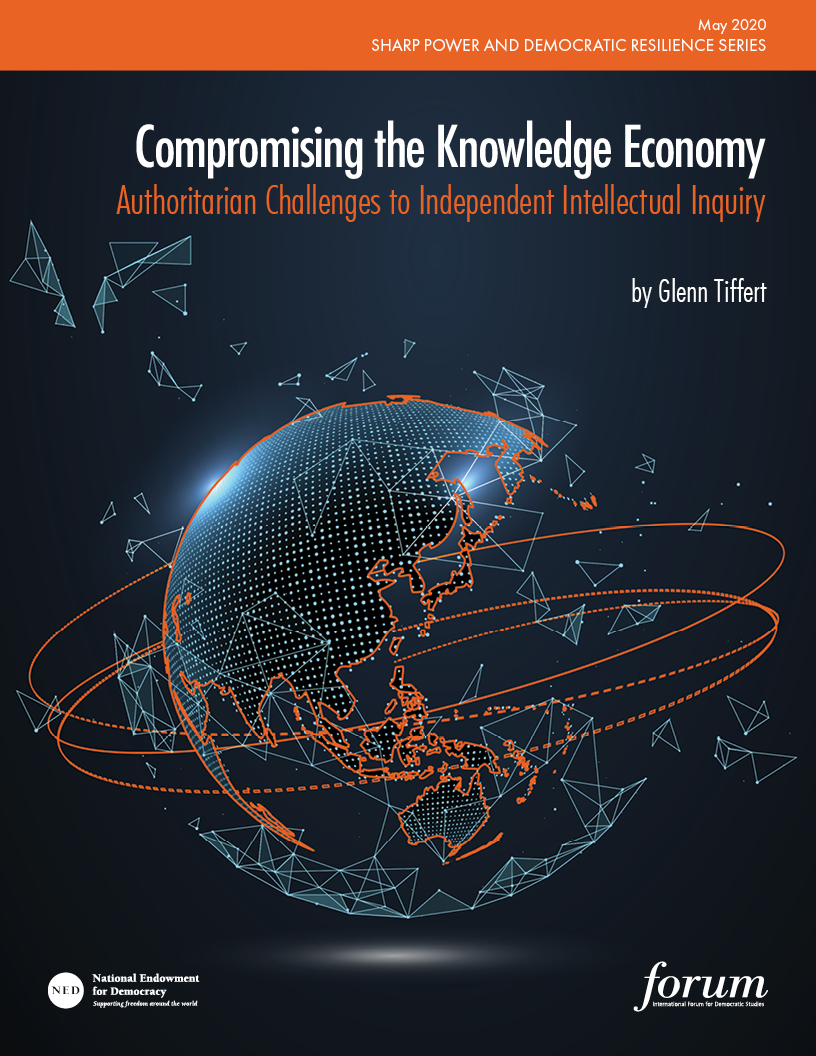 This report explores the compromising effects of sharp power on the civil society institutions that democratic societies depend on for knowledge production, including universities, publishers, and think tanks. Authoritarian regimes—China, Russia, Saudi Arabia, Turkey, and others—are exploiting unanticipated vulnerabilities in open knowledge economies to challenge free intellectual inquiry from the inside. By systematically coopting foreign partners, marginalizing or intimidating dissenters, controlling discourse, and globalizing their preferred narratives, these authoritarian regimes intend to discredit democracy, shore up their positions at home, and facilitate the projection of their power and interests abroad. Resisting the compromising effects of sharp power requires a communal awakening backed by heightened regulatory and institutional standards, major investments in employee training and compliance, robust monitoring, and the fortitude to say “no” to authoritarian influence.

Glenn Tiffert is a visiting fellow at the Hoover Institution, and a historian of modern China. His research has centered on Chinese legal history, the judiciary, and the genealogy of the rule of law in the People’s Republic of China. He works with government and university partners to strengthen resilience against authoritarian influence in the academic sector. 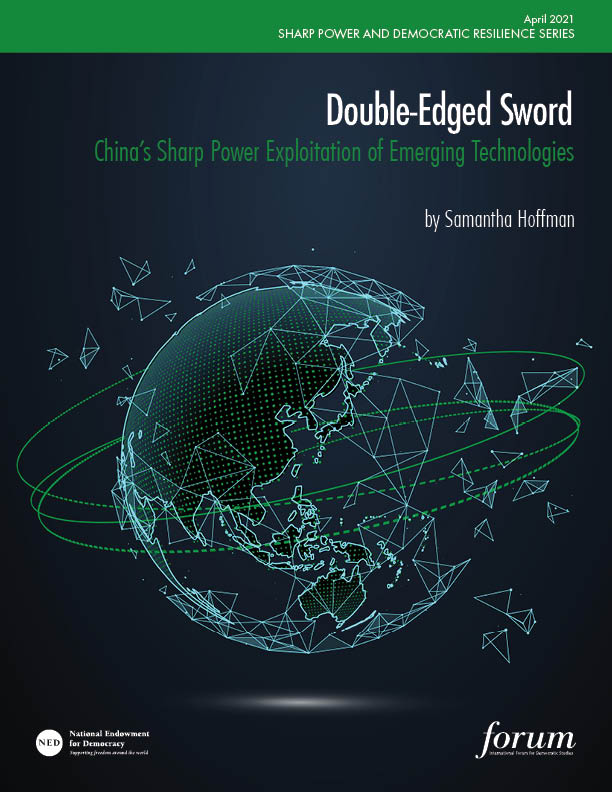 This report describes how the People’s Republic of China (PRC) leverages emerging technologies to undercut democracies’ stability and legitimacy while expanding its own influence. The PRC’s development and global export of “smart cities” technology, for example, showcases the character of tech-enhanced sharp power and authoritarianism. The Chinese Communist Party (CCP) does not distinguish basic public goods, like traffic safety or the prevention of violent crime, from the authoritarian suppression of pluralism and dissent. Instead, it blends the two together. The PRC prioritizes regime security over essential rights, and uses these technologies to monitor its populace and control society. Beijing’s active role in international standards-setting enables the PRC to exploit emerging technologies to enhance its sharp power capabilities. If PRC-originated technical standards are adopted internationally, PRC-made systems will enjoy greater interoperability and market access around the world in ways that erode democratic integrity.

Dr. Samantha Hoffman is a senior analyst with the Australian Strategic Policy Institute’s International Cyber Policy Centre. Her research explores the domestic and global implications of the Chinese Communist Party’s approach to state security and offers new ways of thinking about understanding and responding to China’s technology-enhanced political and social control efforts. 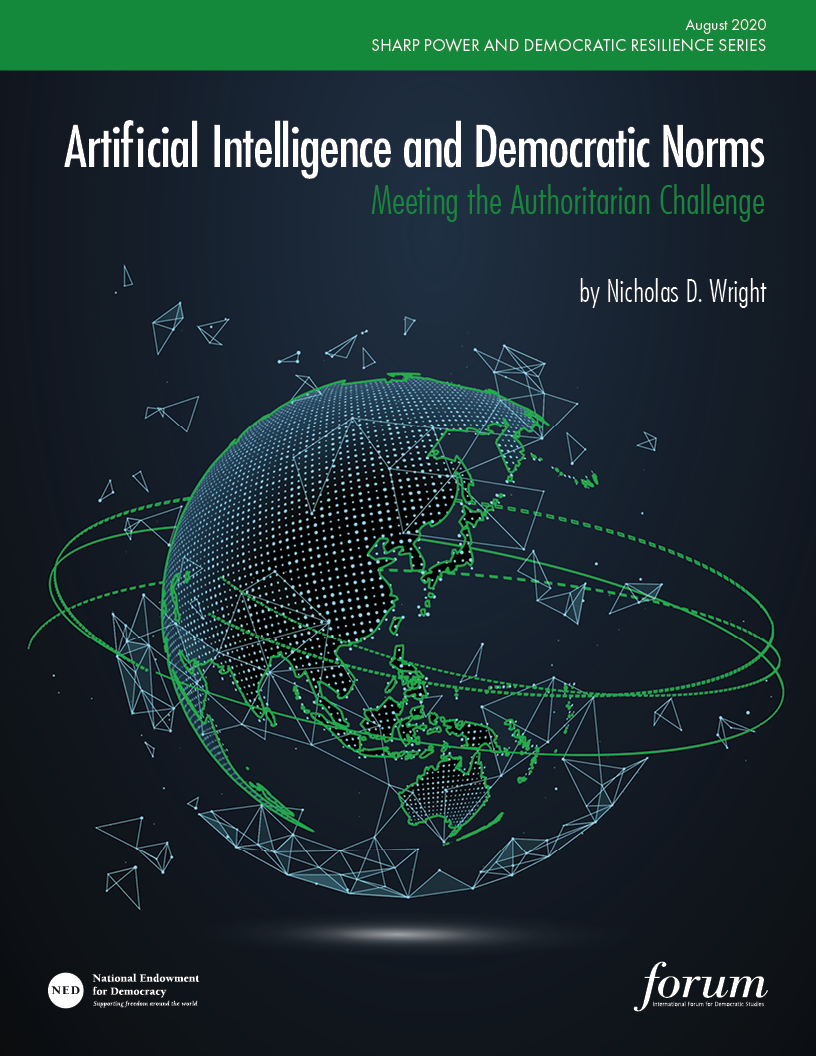 This report discusses how to establish democratically accountable rules and norms that harness the benefits of artificial intelligence-related technologies, without infringing on fundamental rights and creating technological affordances that could facilitate authoritarian concentration of power. Absent these purposeful efforts, societies risk spiraling into new authoritarian forms of surveillance-based governance. Civil society around the world has a crucial role to play in helping democracies resist authoritarian pressure on the global surveillance environment. Organizations focused on diverse issues including privacy, human rights, free expression, technological standards, public health, and consumer protection can help identify, explain, and collaboratively address the complex challenges that arise from AI-related technologies.

Dr. Nicholas D. Wright is an affiliated scholar at Georgetown University, an honorary senior research fellow at University College London, a consultant at Intelligent Biology, and fellow at New America. His work combines neuroscientific, behavioral, and technological insights to understand decision making in politics and international confrontations in ways practically applicable to policy. 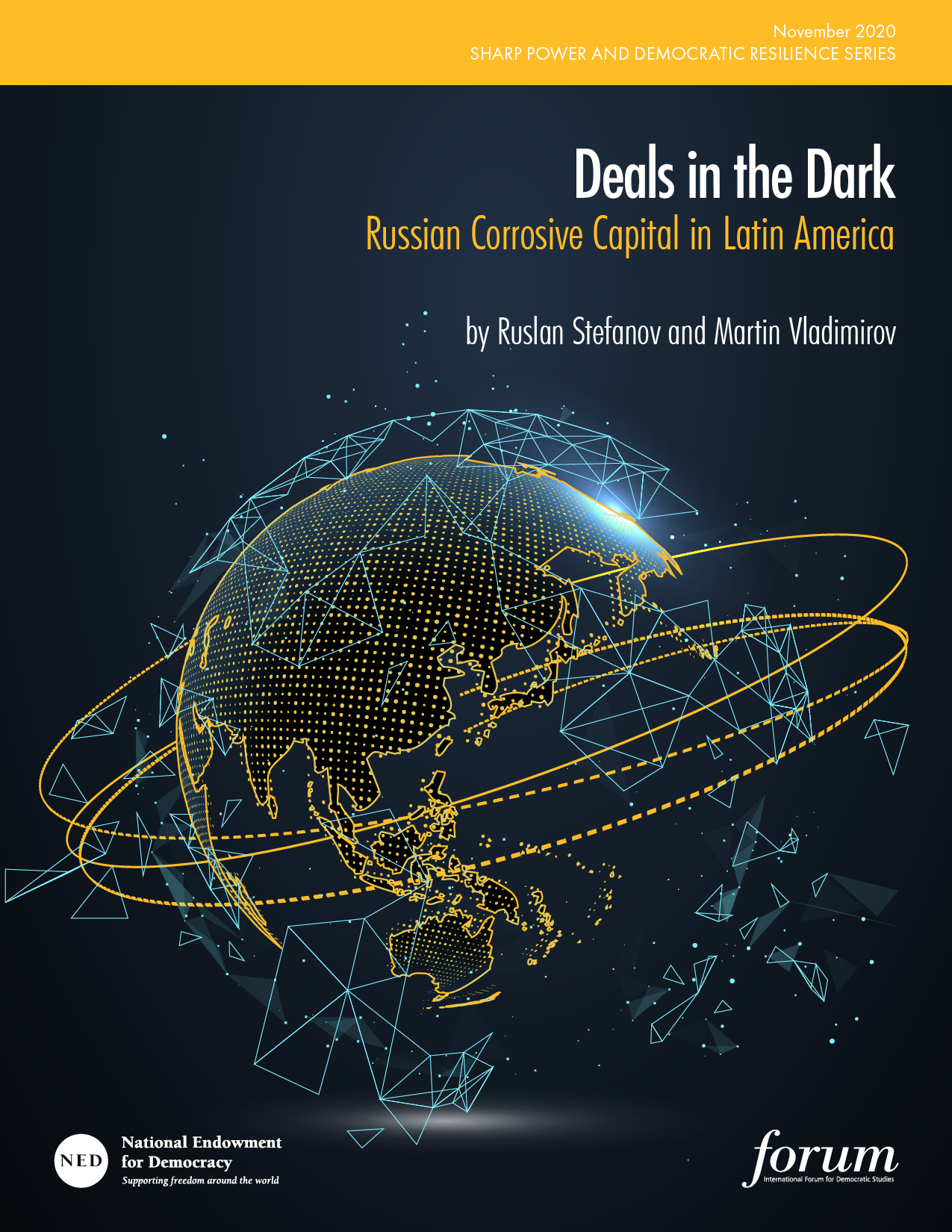 by Ruslan Stefanov and Martin Vladimirov

This report analyzes Russian strategic corruption efforts relevant to two Latin American democracies—Argentina and Bolivia—which experience recurring governance challenges common to other states in the region. Although these countries do not represent the biggest share of Russia’s economic footprint in Latin America, they illustrate the early stages of politically driven investment initiatives from authoritarian states. It is critical to understand the mechanisms and strategies linked to corrosive capital, or opaque financial flows from authoritarian states that undermine the rule of law and democratic governance in other countries. Such understanding represents an essential step toward detecting and preventing more comprehensive authoritarian influence. 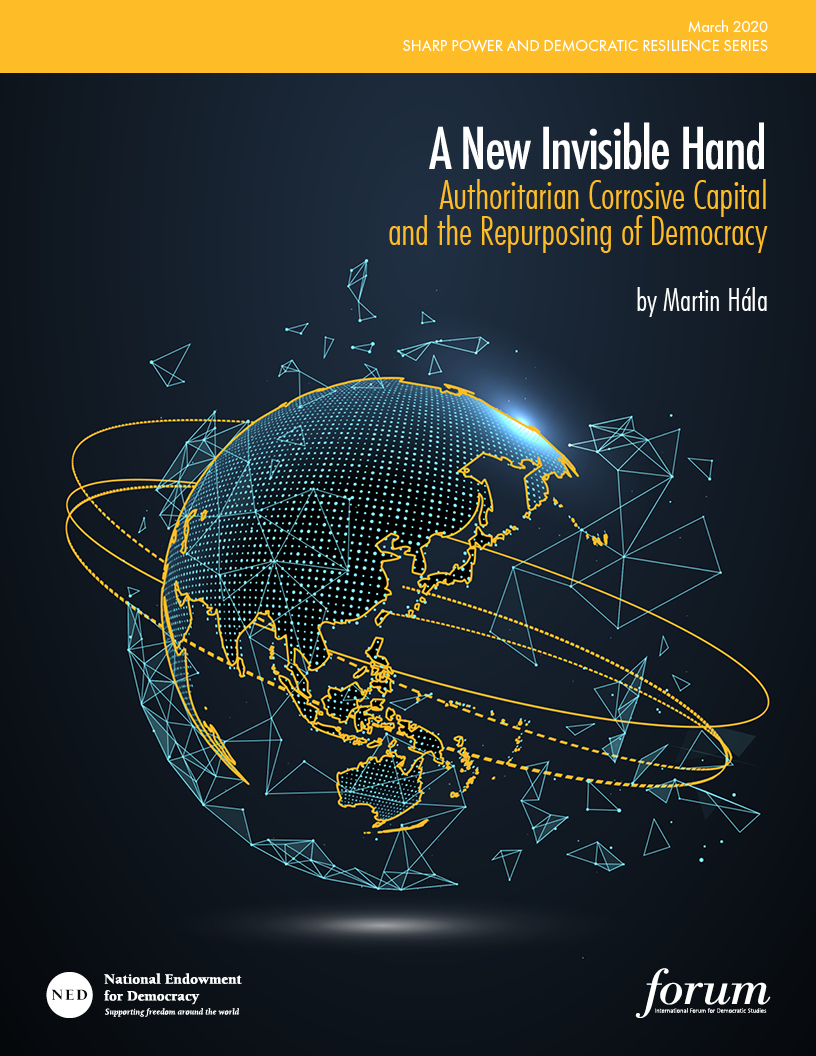 A New Invisible Hand: Authoritarian Corrosive Capital and the Repurposing of Democracy (April 2020)

This report explores the issue of corrosive capital—or capital flows from authoritarian regimes that undermine democratic processes and institutions in the receiving countries—and outlines what an interconnected, interdisciplinary response from civil society could look like. Illiberal regimes like those in China and Russia use capital as a foreign policy tool and often as a form of strategic corruption to bolster authoritarianism as a globally competitive governance system. The legacy of one Chinese firm’s engagement in the Czech Republic vividly illustrates how corrosive capital from technically private companies can be leveraged by  authoritarian regimes to undermine democratic institutions in target countries. Without strong accountability, transparency, and oversight mechanisms, the adverse impacts of such sharp power can go unnoticed and unchallenged. As a critical and distinguishing feature of free and open societies, civil society has an important role to play in fostering democratic inoculation to authoritarian corrosive capital.

Martin Hála is a sinologist and director of Project Sinopsis. He has taught at universities in Prague and Bratislava, and conducted research in China, Taiwan, and the U.S. He has worked for several media assistance organizations, and from 2014 to 2015 served as the regional manager for Asia-Pacific at the Open Society Foundations.