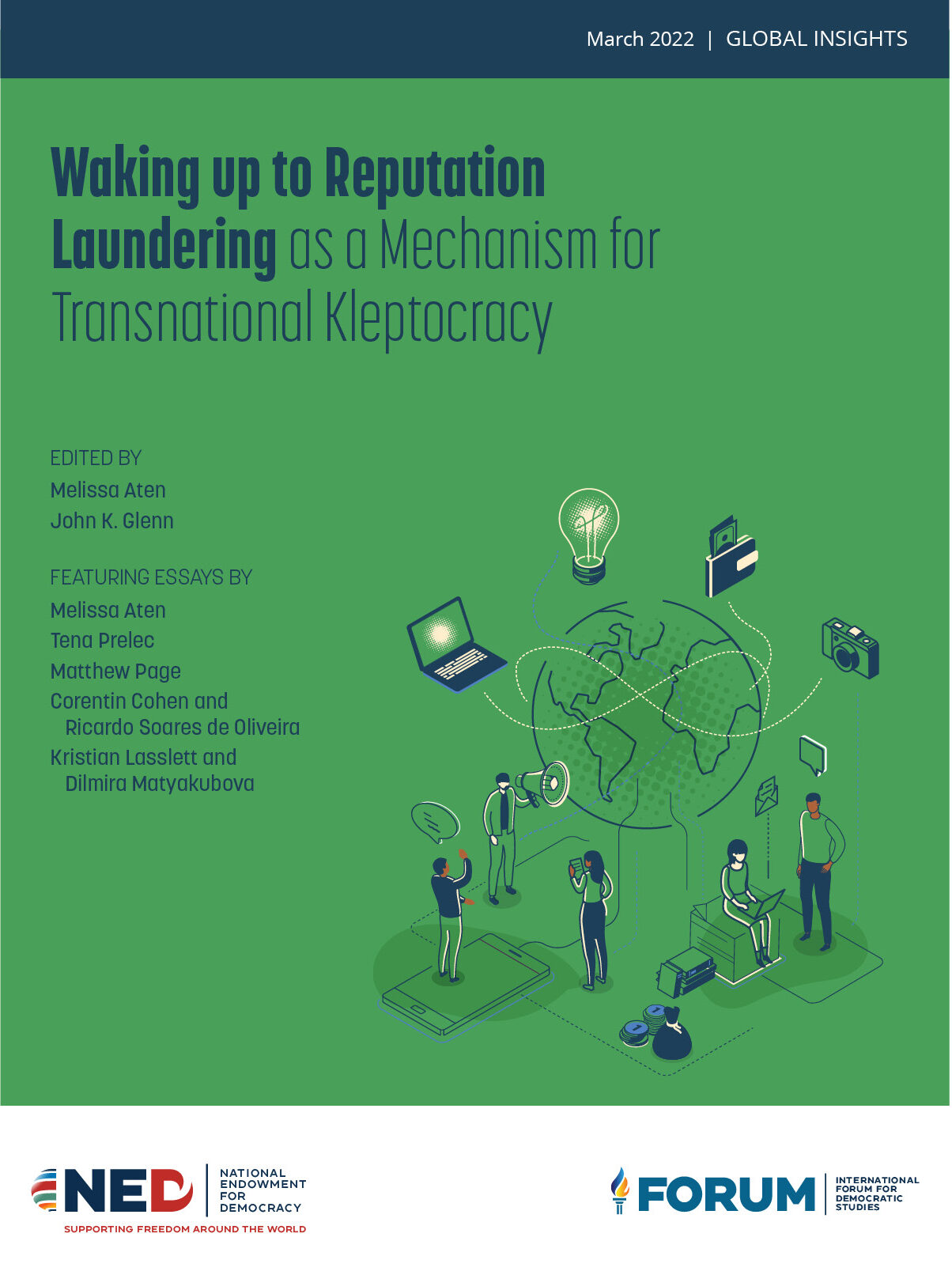 Russia’s unprovoked invasion of Ukraine has forced democracies to reexamine how their own institutions have been used by kleptocratic regimes and oligarchs seeking to launder and protect their illicit gains. While much of the focus on combating transnational kleptocracy has centered on money laundering, addressing the vulnerabilities that allow kleptocrats to engage in reputation laundering—the process by which they attempt to distance themselves from the illicit source of their wealth—is critical for combating authoritarian influence and defending the health and viability of democracy.

The five essays in this “Global Insights” collection illuminate the scope and scale of this transnational challenge and offer recommendations for countering the corrosive effects of reputation laundering on democratic institutions. Public relations and law firms, universities, philanthropies, media outlets, businesses, and other entities all find themselves subject to these kleptocratic pressures. As the authors analyzed reputation laundering efforts within different countries and sectors, a common theme emerged: the urgent need to support civil society activists and journalists working to expose and combat transnational kleptocracy.

Kleptocrats can’t cleanse their reputations alone; they need help from “fixers” in democratic settings. Once kleptocrats have distanced themselves from the source of their illicit funds and are firmly established in open societies, they’re able to manipulate democratic institutions in their favor. This influence is how reputation laundering differs from other forms of image management. While the international response to Russia’s invasion of Ukraine has exposed the effects of reputation laundering on a wide range of cultural, educational, and business institutions, it’s also highlighted the need for greater awareness and a united democratic response.

Reputation laundering allows kleptocrats to consolidate their power at home, with the simultaneous effect of degrading institutions and norms in the destination countries that receive their illicit funds. To rebrand their unsavory pasts, kleptocrats leverage a series of tried-and-tested tactics, from acquiring the services of boutique public relations companies and law firms to offering donations to prestigious universities and philanthropic causes. As with money laundering, the reach of tainted money used to launder reputations is pervasive, as it influences and distorts intellectual inquiry, public opinion, and even political choices.

Kleptocrats see Western universities as an opportunity to convert ill-gotten funds into a luxury good—a world-class education—that burnishes their public images, legitimizes their family name, and positions their children to become reputable global elites. By ignoring the link between tuition or financial gifts and reputation laundering services, the world’s top education institutions are incentivizing and rewarding official corruption, state capture, and other criminal activities that threaten vulnerable populations in unstable and underdeveloped countries. To minimize risks to academic freedom and integrity, policymakers should update their anti-money laundering rules to include academic institutions, and universities should diversify their sources of funding.

Research on the financial and reputational dimensions of transnational kleptocracy has largely focused on the United States and the United Kingdom, drawing attention away from other financial centers that enable authoritarian reputation laundering. In Paris and Lisbon, for example, political communications firms improve the visibility and respectability of their autocratic clients, making it less politically costly for French and Portuguese elites to maintain close relations with them. Facilitating the legitimization of oligarchs and their transnational lifestyles in turn generates political resources that authoritarians can redeploy in their home countries to strengthen their grip on political power. This for-profit support of kleptocrats can have significant political impact on Western financial centers as their own domestic politics and political economies become intertwined with authoritarian clients and partners.

Following a transition of power in 2016, Uzbekistan engaged in a deliberate global campaign to rebrand itself by directing international attention toward market-friendly economic reform and away from ongoing corruption and human rights violations. Ironically, the restoration of market confidence through this “hearts and minds” initiative—facilitated by a vast lobby of public relations, media, and business officials—is generating new opportunities for kleptocratic wealth management strategies and entrenching a modernized form of authoritarian politics. Immediate and practical steps can be taken to address this dynamic, such as improving transparency, strengthening civil society, and documenting the enabling role of international actors and institutions.

Enemies of the State: Pussy Riot...

Enemies of the State: Pussy Riot and the New Russian Protest Rock Part of...

In a May 8 opinion piece for Nikkei Asia, Kevin Sheives...