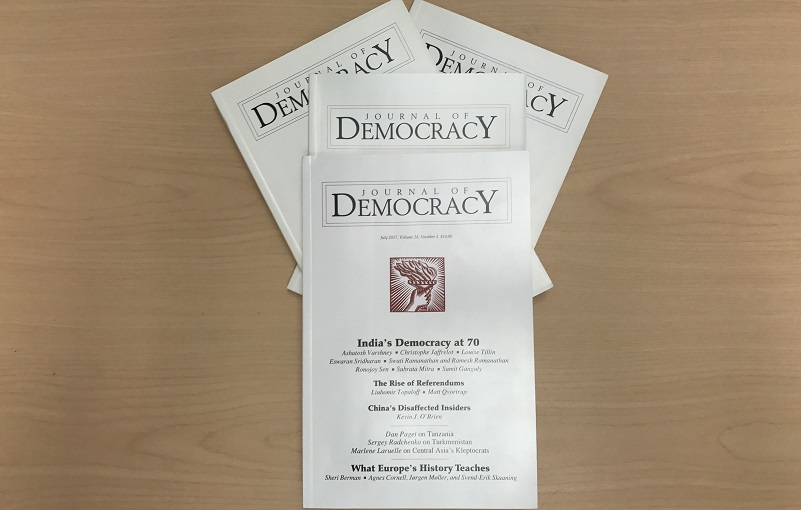 In recent decades, strong economic growth in India has given rise to an enormously wealthy upper class but failed to lift up the masses of the country’s poor. Ashutosh Varshney explains how, in a country where the poor come regularly to the polls, this transformed landscape has required Prime Minister Narendra Modi of the Bharatiya Janata Party (BJP) to address competing political pressures for ensuring economic growth and meeting the demands of mass welfare. “Growth, Inequality, and Nationalism” also examines how Modi’s appeals to Hindu nationalism have shored up his popular support in the face of this economic dilemma.

Other essays in this cluster consider such aspects of India’s democratic heritage and institutions as the country’s federal structure, evolving party system, highly active judiciary, and complex civil society.

Faced with the spread of illiberal democracy, commentators have advocated limiting democracy to protect liberalism. In “The Pipe Dream of Undemocratic Liberalism,” Sheri Berman argues that the history of today’s advanced democracies shows such elite fantasies to be ill-founded. “Historically [democracy and liberalism] have developed together.” Not democratic excesses, but authoritarian legacies and democratic deficits have been the breeding grounds for trends that threaten liberal rights. And, Berman contends, if democracy without liberalism threatens to foster the tyranny of the majority, liberalism without democracy carries its own threat of a decline into elitist oligarchy.

Analogies with interwar Europe surface regularly in arguments about the fragility of today’s established democracies. But Agnes Cornell, Jørgen Møller, and Svend-Erik Skaaning contend that these analogies with interwar Europe are often misdirected. In “The Real Lessons of the Interwar Years,” they show that the oft-cited democratic breakdowns of the 1920s and 1930s occurred in struggling new democracies. Despite immense challenges, including the Great Depression and the rise of totalitarian movements abroad, established democratic systems exhibited remarkable endurance. The interwar example does not portend democratic collapse in Western Europe and North America today, but rather, these authors conclude, points us to “the remarkable vigor of established democracies in the face of crisis.”

The Big Question: How Has Beijing...

Six experts consider how Beijing has sought to suppress...

The Meaning of Sharp Power: How...

From Ujamaa to Demokrasia: Reflecting...

From Ujamaa to Demokrasia: Reflecting on 50 Years...

Democratization in Africa: Progress and Retreat A...