HONORING HEROES OF HUMAN RIGHTS AND DEMOCRACY IN RUSSIA 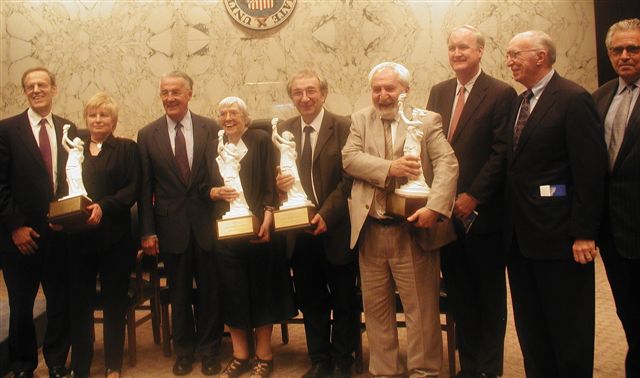 On June 9, the National Endowment for Democracy honored leaders of organizations known as the backbone of the democracy movement in Russia and the principal bulwark against the return of tyranny. Many of them are human rights organizations that protect basic freedoms and defend the most vulnerable population groups. Others are associations of independent journalists and organizations that both educate citizens about democracy and preserve the society’s memory of those who perished under communism. Still others are watchdog groups that promote transparency and government accountability; ecological organizations; independent research centers; election monitoring organizations; groups that provide independent information about the war in Chechnya; and many others.

The award recipients and leaders of these such organizations are:

Remarks at the event were made by:

The award presentation was preceded by a roundtable discussion, Prospects for Democracy and Human Rights in Russia.  Those in the discussion included:

We also wish to acknowledge the gracious assistance of the following individuals:  James Billington, Mark Palmer and Esther Coopersmith

Is Democracy Possible in Russia?

The International Forum for Democratic Studies at The National Endowment for...

The Corrosive Impact of Illicit...

Democracy Research News is the electronic...

In a May 8 opinion piece for Nikkei Asia, Kevin Sheives and Ryan Arick identify...