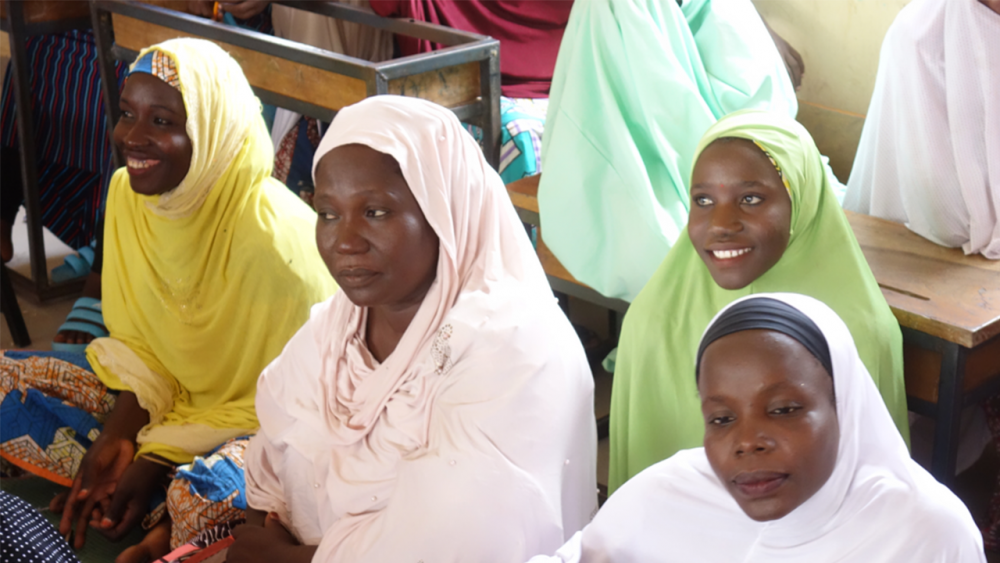 Since 2009, the Boko Haram insurgency has devastated northeast Nigeria and the border regions of Cameroon, Chad, and Niger. Despite suffering horrific atrocities, some Nigerian women have transformed over the past decade—from marginalized citizens, often excluded from formal political processes, into community peace builders not afraid to speak up.

“Power and authority to resources and [participation] in decision-making are in the hands of men, so women are often left out of the equation,” says Janet Adama Mohammad, one of the female leaders helping women in the region to find their voice. In 2010, she joined Conciliation Resources, a grantee of the National Endowment for Democracy, to lead the organization’s peacebuilding efforts across West Africa. Among other initiatives—such as training and mentoring youth populations—Conciliation Resources works with local partners Hope Interactive and University of Maiduguri Muslim Women’s Association to create safe spaces for women to share their stories.

“Some of them were sexually abused, their children killed in front of them or taken away, especially their young girls taken away into forced marriages and never to be seen again; their husbands slaughtered in their presence, or taken away and never to be seen again; their sons taken and made to come back as enemies to even their parents, to attack and kill in the very communities in which they were born and raised,” explains Mohammad. “Women in northeast Nigeria have suffered untold gendered abuses during the insurgencies and yet society does not permit them to share what they went through during attacks.” (See more about our work in Nigeria.)

Working in 12 conflict-affected communities across the northeast states of Borno and Yobe—and with the goal to expand—Conciliation Resources created female-only places called Ra’ayin Mata, or Women’s Voices in the local Hausa language, to empower women to tell their experiences of conflict. The meetings sometimes take place “under a shed by a house, in the compound of one of the women, in a classroom of a school in the community,” or other rooms rented by the organization, says Mohammad. Hundreds of local women already use these centers, which give many the feeling of safety to speak up for the first time. Listening to others also provides strength through connection and creates a local support network to process their trauma.

“I have learnt that my voice really matters in my home and my community. I used to secretly pray and leave everything to God,” one woman from Maiduguri, the capital and largest city of Borno, explains on the Conciliation Resources website. “But now, I go further and report things to the local community leader. Our leaders now allow us women to speak with them about our concerns.”

The experience of conflict has affected ages and genders in different ways. Men, especially youth, are more likely to be conscripted, killed, or detained by Boko Haram and Nigerian security forces, but men also hold greater power and resources to flee. Women from conflict-afflicted areas are more likely to be internally displaced and to become solely responsible for their families’ safety and livelihood. Historic power dynamics in the northeast frequently reserve political, social, and economic circles for men, which makes some women vulnerable to recruitment by Boko Haram and generally excludes women from local efforts to resist the insurgency and strengthen their communities.

Although traditionally marginalized, women in northeast Nigeria now have safe spaces to gather and discuss their concerns as a group. To reach multiple generations, the organization hosted a Peace Kitchen so elderly women and younger girls can share perspectives while cooking a meal together. Through Ra’ayin Mata, discussions about issues affecting the community now take place on the local radio station to spread the opportunities to new female participants. This initiative led by Conciliation Resources provides a platform for women to forge a new network, advocate for their unique needs to create change in their communities, and to shift perceptions about women in Nigeria who suffer abuses.

More than 20 years after the peace deal, Bosnia and Herzegovina is still challenged...

The July 2019 issue of the Journal of Democracy features...

This citizen organization was formed to protect the...