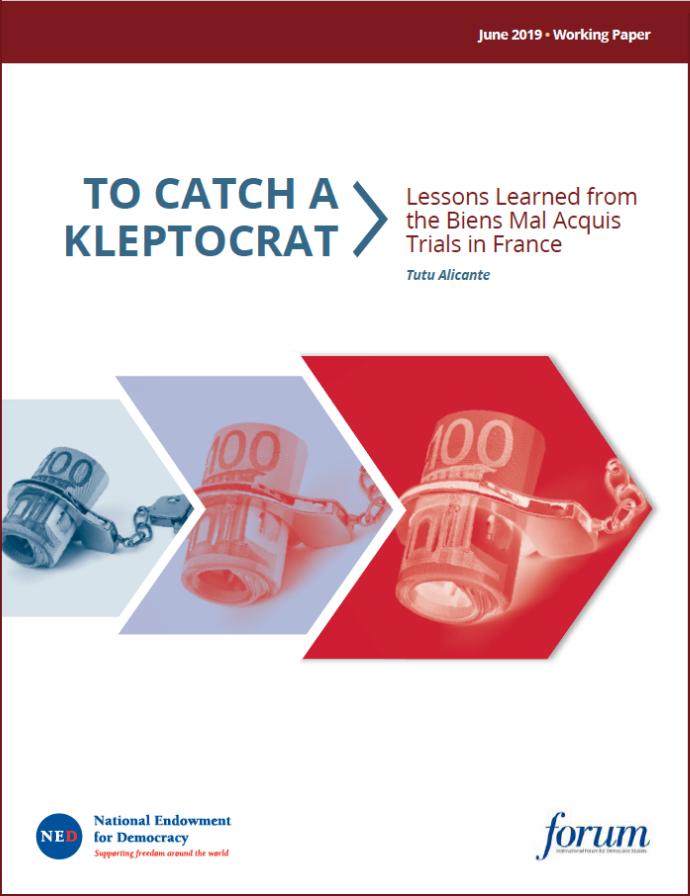 To Catch A Kleptocrat: Lessons Learned from the Biens Mal Acquis Trials in France, authored by Tutu Alicante, is a working paper produced by the National Endowment for Democracy’s International Forum for Democratic Studies. This publication is part of an International Forum working paper series, examining the dynamics and impact of resurgent authoritarian influence in the era of globalization, including through networked transnational kleptocracy and manipulation of the global information space. For more on these themes, visit the Forum’s blog, Power 3.0: Understanding Modern Authoritarian Influence, and its related podcast.

The International Forum for Democratic Studies is pleased to re-release To Catch A Kleptocrat: Lessons Learned from the Biens Mal Acquis Trials in France by Tutu Alicante as an effort to encourage dialogue and share insights of research with civic activists and broader communities around the world. By translating it into other languages—Portuguese, French, and Spanish—we hope to reach wider audiences of civil society activists in the hopes that it will provide a roadmap for how strategic litigation combined with networked civil society and independent media can be used to combat transnational kleptocracy.

Since this paper’s publication in June 2019, there has been growing momentum in the democracies’ fight against transnational kleptocracy. The international community has realized the foundational threat that transnational kleptocracy poses to democracy, human rights, and national security, and it has developed numerous policy responses to address this challenge. Recent U.S. policy proposals speak to this increased awareness and action.

There have also been developments in the trial against Equatoguinean Vice President Teodoro Nguema Obiang. On July 28, 2021, France’s highest appeals court, the Cour de Cassation, upheld the guilty verdict against Obiang, marking the end of the lengthy court battle described by Tutu Alicante in his analysis. In another win for the civil society organizations engaged in this fight, the French National Assembly passed asset repatriation legislation in March 2021 that would ensure assets seized in international corruption cases, such as the Biens Mal Acquis trials, would return to the country from which they were stolen. Based on the evidence presented in French courts, the United Kingdom also sanctioned Vice President Obiang with asset freezes and a travel ban, showing how a prosecution in one jurisdiction can lead to legal action in others.

While these policy responses are undoubtably vital in the fight against transnational kleptocracy, they are underpinned by CSOs’ brave and tireless work in exposing and documenting kleptocracy around the world.

The Biens Mal Acquis trials in France are an excellent example of how civil society and independent media, working together across national boundaries, can bring justice to victims of kleptocracy. This networked approach is critical to safeguarding the future of democracy, human rights, transparency, and governance successfully.

Transnational kleptocracy is a form of networked state capture in which political elites redirect state resources for their own benefit, launder their ill-gotten gains through the international financial system, and spend it in settings protected by the rule of law. Today, kleptocracy represents one of the most complex challenges to democracy around the world. In order to protect their ability to loot their own countries, these elites neutralize efforts to hold them accountable, effectively sidelining independent civil society or media. This dirty money also has harmful effects in the places where it is laundered and parked, corroding democratic norms, rule of law, and regional and international organizations.

Since kleptocratic elites deliberately weaken independent accountability in the countries where the theft occurs, victims of kleptocracy have little recourse for achieving justice domestically. Instead, strategic litigation in outside courts offers greater promise for pursuing justice. At the same time, these complicated legal processes require a transnational coalition of actors in order to be effective.

Over the last decade, a groundbreaking case of strategic litigation made its way through the French courts. In the Biens Mal Acquis (“ill-gotten gains”) case, French prosecutors set their sights on the leaders of Congo-Brazzaville, Gabon, and Equatorial Guinea for assets acquired on French soil. These assets were allegedly purchased with ill-gotten gains and involved fraud or money laundering, based on the vast gap between elites’ official salaries and the amount of wealth held by them and their families in France. On October 27, 2017, Equatoguinean Vice President Teodoro Nguema Obiang became the first actively serving foreign senior official to be tried and convicted in French courts on charges of diverting corruptly acquired funds into investments on French territory. He was given a three-year suspended sentence.

Ilya Lozovsky talks about OCCRP’s "Troika Laundromat" investigation and the...

A monthly newsletter of activities,...

The International Forum for Democratic Studies has...