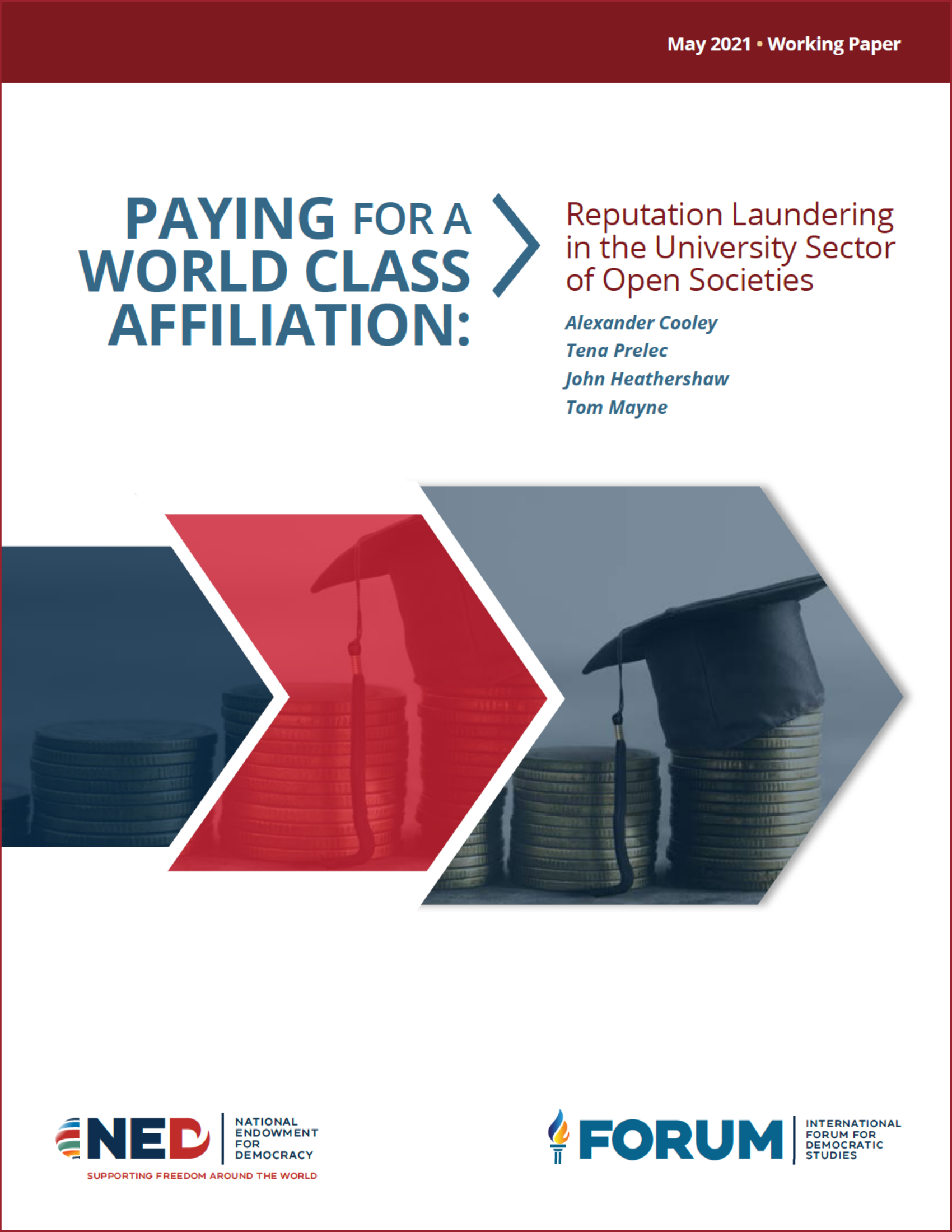 Modern kleptocracy thrives on the ability of kleptocrats and their associates to use their ill-gotten gains in open settings. This often takes the form of investing in high-end real estate or other luxury goods, which serves to both obscure the corrupt origin of the money and to protect it for future use. But there is also a subtler dynamic at play. The use of kleptocratic-linked funding or other forms of engagement in open societies to blur the illicit nature and source of the donation serves to launder kleptocrats’ reputations, as well as their cash. This careful cultivation of positive publicity and influence empowers autocrats and their cronies. It also entrenches kleptocrats—and the regimes with which they are associated—in positions of power.

Universities and think tanks in open settings are prime targets for reputation laundering. The rapid internationalization of the higher education sector, as well as the swelling demand worldwide for Western education makes academic institutions particularly vulnerable to this form of transnational kleptocratic activity. Indeed, over recent years, there has been a major surge of foreign funding to U.S. and U.K.
universities. The composition of fundraising has also changed. Major gifts comprise a growing share of donations, and a relatively small number of wealthy individuals contribute nearly 80 percent of gift-giving to universities.

These challenges also affect other open countries where foreign gifts traditionally have not been a major source of funding but are now actively being offered and sought. Countries like the Czech Republic and Germany have witnessed high-profile scandals involving funding from PRC-connected sources, both in exerting influence through opaque payments to faculty or through the application of Chinese law to donor agreements with the university. Such examples highlight the transnational nature of this challenge.

Key mechanisms by which individuals can launder their reputations in the higher education sector include:

The risks of kleptocratic funding to U.S. and U.K. universities is taking place at a time when several high-profile scandals have forced universities to consider their own reputational risks of accepting donations from individuals with unsavory pasts. These scandals, alongside the rise in importance and influence of social media has promoted positive change. Universities are increasingly aware of the need to keep their reputation beyond reproach and have adopted ethical principles and expanded review procedures in response to increased media scrutiny.

Despite the rising awareness of the dangers posed from accepting donations of questionable provenance, universities in the U.S. and U.K. face several challenges in curbing this trend:

Tackling reputation laundering should be a priority for academic institutions. Universities should conduct due diligence on prospects before beginning negotiations about the terms of a particular gift. They should also provide a comprehensive and searchable public list of all donations (foreign and domestic) over a specified threshold. In addition, higher education institutions should consider making its gift acceptance policy, including the ethical guidelines and core principles by which donations are accepted, publicly available. In this vein, it would be prudent for universities to encourage institution-wide ethics training, regular accountability reviews, and the participation of the student body in major endowment decisions.

Given the struggles U.S. and U.K. universities are experiencing when confronting these issues, universities in other open settings are bound to face similar challenges in combating these transnational kleptocratic and reputation laundering networks.

“Paying for a World Class Affiliation: Reputation Laundering in the University Sector of Open Societies,” authored by Alexander Cooley, Tena Prelec, John Heathershaw, and Tom Mayne, is a working paper produced by the National Endowment for Democracy’s International Forum for Democratic Studies.

This publication is part of an International Forum working paper series, examining the dynamics and impact of resurgent authoritarian influence in the era of globalization, including through networked transnational kleptocracy and the manipulation of the global information space. For more on these themes, visit the Forum’s blog, Power 3.0: Understanding Modern Authoritarian Influence, and its related podcast.

The Big Question: How Will the...

Four leading experts share their views on how the COVID-19 pandemic will affect...

This special edition of the Pandemic Ploys newsletter highlights...

Lessons Learned from the Biens...